In Which Jenn Gives Her New Car A WDW Name

Once, in the very recent Holocene, I was lucky enough to be gifted a new car by my parents. They wanted something sturdier and sportier and, well, it's a long story, but the end result is that they gave their current car to me in exchange for my old car as a trade-in. Score!

It's a weird adjustment, though - my old car was from 2006 and the new one is a 2016 model. My GOD has a lot change in the space of a single decade. This baby has two separate display screens that tell me things like the temperate and the date and how many miles I can drive before my tank is empty, it charges my phone and plays music through a USB port while simultaneously allowing me to use the GPS, bluetooth capability allows me to answer calls via a button on the steering wheel... Even the gas cap is this sleek cover you press to pop open. Every time I slide into the driver's seat I feel like I'm at the helm of the USS Voyager.

The most disconcerting thing for me is the automatic headlights. They don't dim immediately after exiting the car, so I find myself walking backwards and pausing, waiting for them to shut off because what if this time they don't and the battery drains and I'm SOL before work???

For most of you, here in the future where the regular cars are, this is probably old hat. But let me tell you, Rowdy had NONE of these features.

Oh, right! Rowdy. I gave my car a name because if there's one thing I'm good at, it's anthropomorphism. (Sometimes I still wonder whatever happened to that poor lamp.) I named my first car Rowdy after the dog from Scrubs.

Naturally my new car needed a name too. I tossed some ideas around - Bruce, Aziraphale - but none of them seemed quite right. Then I hit upon the thing: perhaps a name themed to Walt Disney World?

Of course Figment was my first thought, but this car is silver, and if I'm going to spend that kind of frivolous money, it's gonna be on WDW itself, not unnecessary pastel purple paint jobs. (Although that would be sweet. With orange detailing, obvs.)

It didn't take me long to hit on the best fit: WDW ride vehicles. Doom Buggy was a good one, but not quite right for a small silver hatchback. I gift that moniker to the black SUVs and tinted-window sedans of the world.

The Peoplemover was out, too; while I love that ride with all my heart, when applied to such basic transport as a car it seemed mundane. A car named Peoplemover strips the magic out of it.

And then I had it. I knew my car's name.

It's from a ride that, while not a slam dunk with everyone, I happen to love. It has a whimsical feel appropriate to the vibe of the car. It implies the sort of advanced technology that is suddenly hitting me in the face. It even has the exact same lady robot voice. What is it? That's proprietary.

Just kidding! Allow me to present: THE TIME ROVER. 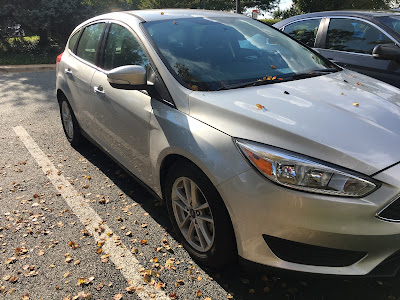 So every time I drive it I can say things like "meteor shower approaching" in a robotic voice and then laugh.

Does your car have a name, WDW or otherwise?

Don't forget, you can follow FRoA on Twitter @fairestrunofall. If you have any questions or thoughts, leave a comment or email us at fairestrunofall@gmail.com. See ya real soon!
Posted by Jenn at 8:59 AM