In Which Jenn Goes On A Running Food Bender

Let's see, how to explain this. Have you ever... gone on a sort of... pre-long run food buying spree... like, way in advance... without planning it?

Now that I'm officially training for the Baltimore Marathon, I gotta get those mega-long runs on the docket. And I have - I have a 15 miler, 17 miler, and 20 miler laid out on the calendar. For my normal long runs - say, 9-12 miles on average - I don't usually require much beyond a pre-run snack and some water, but these big'uns need a bigger sustenance commitment.

There are lots of ways to do it: water, sports drinks, gels, chews, gummy bears, pretzels, honey... a lot of peoples' boats float a lot of different ways. I have found I perform well with Swedish Fish, so I bought one box for my 15 miler, just to start things off. So far so well measured.

Then last week I was doing my weekly Target grocery run. I was in the candy aisle to grab some 90% dark chocolate (TRY IT!!!!!! YOUR TASTE BUDS WILL EXPLOOOODE) and happened to pass by the theater box candy. Well, I'm here and thinking about it, I thought, so I might as well grab two more boxes for 17 and 20.

That simple act opened the floodgates. In the drinks section for some seltzer, I saw Body Armor sports drinks were on sale. I usually go with PowerAde since that's runDisney's MO, but what the hell - I grabbed two bottles without hesitation.

Over by the peanut butter, I was picking up a canister of chocolate PB2 when I saw that Justin's individual nut butter packets were on sale as well. What an amazing mid-run snack that would be for my really long runs!! I said to myself, even though this is something I've never tried. Well, I will now! Into my cart went two peanut butter-and-honey packs.

And, uh, here's all the stuff I hadn't planned on buying for runs some of which aren't for another month: 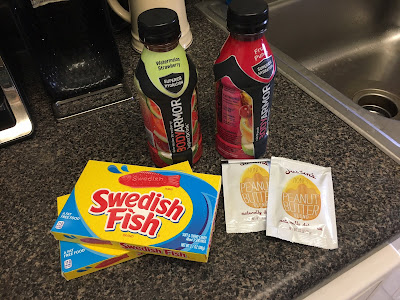 Will it all be actually good for my long runs? WE SHALL SEE.

Do you ever impulse-buy food in the name of training? What are your favorite pre-and mid-run snacks for long runs?