In Which Jenn Has An Excellent Parks Half Marathon

I didn't mention this half much in advance of my running it, and here's why: I didn't want to jinx myself. I've gone into races with fanfare before, bellowing about how I was going to crush it, and wound up crushingly disappointed. Which is guess is tangentially related, but not really what I'm going for.

I woke up to a near perfect race day: morning lows in the mid-50s with a predicted high of the low 70s, meaning a brisk morning perfect for running. I jumped out of bed, gathered my race stuff, and picked up a ride from Pat's boss (he was also running the race and lives close by and he kindly offered, which was nice).

The course was different from the first time I ran it, so we had a little further to drive - all the way down to Shady Grove. Pat's boss graciously dropped me off by the start line and I did my usual thing: porta potty stop, Swedish Fish snack, dancing around in a giant throwaway sweatshirt because I'm cold.

I found my fellow runner/friend Sarah and we chatted a little before race start, which was pretty unceremonious - if there was a pre-race anthem or announce we couldn't really hear it. At the last minute I decided to take one more quick bathroom jaunt. I was unable to pee then but immediately wanted to five minutes later and basically the rest of the race. Oh well.

Anyway, the race started and we took off down the road. The first mile or two was in residential neighborhoods that quickly gave way to a trail around Needwood Lake. This portion in particular was a little hillier than I would like, especially in contrast to the downhill start of the old course, but thanks to my hill training I was fine.

Once we left the lake area things started to flatten out helpfully, but otherwise the course wasn't terribly interesting. There were a few stretches of spectators, including two dressed as pirates and one as Mr. Incredible. I did kinda like this bridge: 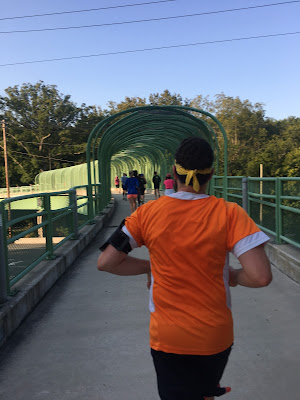 Past the bridge we made it back into the eponymous county parks that comprised the whole of the former course. It was a little weird remembering seeing the same stretch but at a completely different point in the race; I was constantly experiencing strong deja vu with the caveat that it all should've happened earlier.

This unfortunately meant that the famous Silencer, a hill that's not terrible but not NOT terrible, came several miles later in the race, which of course isn't what you want. But a group of children had renamed it High Five Hill and offered such with off-brand Mickey gloves, so that was good for morale.

For almost all of the race I hung with the 2:10 pacer, and that mostly worked fine. The vast majority of our miles came in under 10 minutes, which was great, although maybe if I hadn't needed to pee I could've been faster...? What can ya do. Regardless, around mile 11 I picked up a little speed and left the group in the dust. It was passin' time! (And time to be passed, but they can't all be winners.) 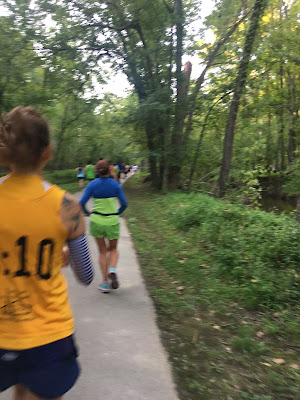 Now comes the bit I feel uncertain about. My GPS watch showed just under 13 miles when I turned the corner and saw... the finish line? Usually my GPS clocks MORE mileage than a half, so I was totally taken aback when I finished the race and saw 12.98 on the screen. Only .12 off, but still. Mind you, it's a legit course, and I know that GPS isn't 100% all-the-time reliable, but it makes me a little uncomfortable with my PR...

There was a ton of food and water and other stuff at the finish line, but I had a different plan for my post-race activity. I found Sarah and we proceeded to... RUN HOME.

More on that in a later post. In the meantime, I really hope my GPS just suffered a brief hiccup because I want the PR.

Don't forget, you can follow us on Twitter @fairestrunofall. If you have any questions for us, leave a comment or email us at fairestrunofall@gmail.com. See ya real soon!
Posted by Jenn at 8:46 AM