In Which Jenn Recaps The Across The Bay 10k 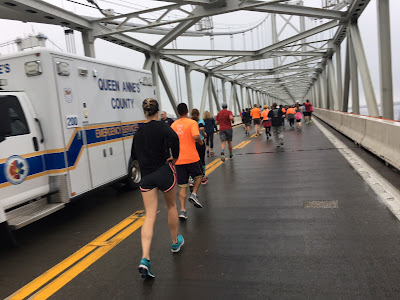 The Across the Bay 10k, spanning the entirety of the Chesapeake Bay Bridge, has intrigued me for years. Thing is, it's invariably the same exact weekend as the Wine & Dine Half Marathon, so I was never able to sign up. Since I chose the Dark Side Half over W&D this year, the weekend was finally free. I got to run the bridge!

Let's back up. My friends Sarah and Elizabeth accompanied me on this adventure, which started with a jaunt to the expo and sleepover at Elizabeth's place before rising before the dawn and heading to one of the race pickup locations (parking directly at the race start was discouraged as traffic was going to be congested enough as it was with one bridge closed).

We boarded a shuttle and were at the start area in no time flat. There wasn't much to it; just a porta potties and some inflatable arches. This is fine with me, but I take issue with their wave start system. First of all, they seemed to be arbitrarily assigned. I was technically in wave 4, Elizabeth was wave 3, and Sarah was wave 5. But Sarah is usually a touch faster than me and Elizabeth had never run a 10k before in her life, so I'm not sure how they arrived at these assignments.

But here's the bigger problem: it didn't matter at ALL. No one was checking bibs and waves weren't enforced in the slightest. Not that it really made a difference since there was no signage or other clear indication of which wave was up anyway. And there were FIFTEEN MINUTES between waves. This is RIDICULOUS. The justification given is that this gives the walkers some time to get ahead, and while this race is indeed walker friendly, those walkers should be in the last waves. But they were not. They were doing whatever the hell they felt like. I saw walkers in the second wave. Sheesh.

Oh well. We all started in wave 4 and it was fine. I lost Elizabeth quickly and then Sarah; according to the latter she was just a bit behind me the whole time, which makes sense since her final time was about a minute slower than mine.

The race started just a bit from the bridge itself, and I'd say we were hitting the first portion of it in about a quarter mile. It was pretty congested to start but by the time my GPS watch registered the first mile things were clearing up considerably. Of course, there were walkers from earlier waves clogging up the works (Four abreast? REALLY???) but I was able to dodge them.

One interesting thing to note is that the water stops were cupless, I'm sure to prevent unnecessary litter in the bay. There were jury-rigged water fountains made with PVC pipe and water kegs at a couple points at the race. Given how short the distance, this worked fine for me, but some others might require a water bottle.

The bridge has a slight uphill for the first, oh, I don't know, mile and half? It really wasn't that bad; although that outdoor running is finally paying off for me! And of course hitting the crest of the bridge and beginning the downhill portion was delightful. That probably lasted for a good mile or so. Then there was a flat section, but by the time the bridge ended we were only a bit past the 4 mile mark. (Incidentally I never did see a mile marker and relied entirely on my watch, but other people claim they saw a marker or two so what the hell do I know?)

I know this is a pretty boring description what is supposed to be an EPIC, SCENIC course. Certainly the multitude of photographers would suggest that photos would be a highlight. But the day was gray and dreary and the sky and ocean were doing their best imitation of grayscale, and anyway I've driven over the same bridge like 87 million times, so I wasn't super awed. Probably I'm a jaded jerk.

Also there were like twelve billion police there to, among other things, make sure you didn't suddenly decide to hurl yourself over the bridge. They thought of everything!

After the bridge itself, we ran into what seemed to be a small office district, then onto the highway - which included a small hill around mile 5.5, which, like, COME ON, but such is racing life. Then it was around a corner and into a giant field and BAM! Done.

I  had a really good race - my IT Band, while taped up, didn't give me any trouble, and my body was ready and willing. I finished in just under 58:11, which is darned good for me!

Sarah came in just behind me, and we grabbed some snacks and water before wandering around the finisher's area while we waited for Elizabeth. There were a remarkable number of bars for so early in the morning, but that's to be expected. There were also multiple food vendors, but only one selling coffee. I was FREEZING so I bought some, and then spent the next half hour fielding a volley of "WHERE DID YOU GET THAT??"s. Somebody ought to bring in a coffee truck; they'd make a killing.

Elizabeth crossed the finish line about half an hour later, at which point we hopped a bus back to the satellite parking (kinda but not really the wrong one but that's a long and not that interesting story and anyway it was the driver's fault). And then we walked into Annapolis and got brunch. And that was our race day!

All in all I had a nice time, and would recommend this race to anyone looking for a relatively easy 10k experience. Even Pat, who tends to look upon 5ks with a dubious eye, expressed interest.

But is it worth skipping Wine & Dine for? SURELY YOU JEST.

Don't forget, you can follow us on Twitter @fairestrunofall. If you have any questions for us, leave a comment or email us at fairestrunofall@gmail.com. See ya real soon!
Posted by Jenn at 7:16 AM