In Which A Shining New Era Is Tip-Toeing Nearer

Annnd we're back. It's a new year, and so of course my thoughts immediately turn to the WDW Marathon, the sole remaining thing I look forward to in life. Because once Christmas is over WINTER IS TRASH.

Oh, shoot; my first post of the year and I'm already off topic. What I meant to talk about is: Christmas presents!

Among my friends I am synonymous with Disney. Indeed, at a hibachi grill the other day the chef did the opening trick where he sets the oil on fire and the entire table turned to me and chorused IT'S SHAPED LIKE MICKEY, JENN!

That level of synchronicity is frankly eerie and I'm starting to wonder if everyone I know is a bot. But if they are bots, at least they are bots who know to get me Disney-related presents. Hell, I received TWO Mickey waffle irons this year. If I can't return one I will be making Mickey waffles AT DOUBLE THE SPEEDS. Breakfast at my house, everybody!

But despite this, I was a touch disappointed to not get two items on my Christmas list this year: a Mushu shirt and a Lion King dress (yes, from my mecca of Disney clothing, Hot Topic). So I did what any salaried sub-adult does: I hopped on the internet the very next morning and bought them myself.

That was the morning. It was also my birthday, and at lunch Pat gave me my birthday present.

I am SO EXCITED.

It was: TICKETS TO SEE THE LION KING ON BROADWAY!!!

Pat said he thought about doing Aladdin but he knows I love The Lion King so he went with that (which was the correct decision). I've seen the touring production once about five years ago and it was awesome. On Broadway in their home theater I can scarcely begin to imagine how mind-blowing it'll be. We'll be in NYC the weekend after next and I can't wait!!!

And I have just the dress to wear. 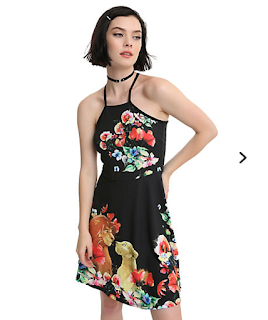 Do you get Disney presents a lot? Have you seen any Disney productions on Broadway? Are you gonna be a mighty king, so enemies beware?