In Which Jenn Pens A Polite Apology To Lumiere

Hey, remember a couple years ago when the Wine & Dine Half was made into a morning race? And runDisney introduced the Two Course Challenge and I was like, pssssh, AS IF. And then I punched Lumiere DIRECTLY IN THE FACE.

Well, I owe Lumiere an apology, because this just happened: 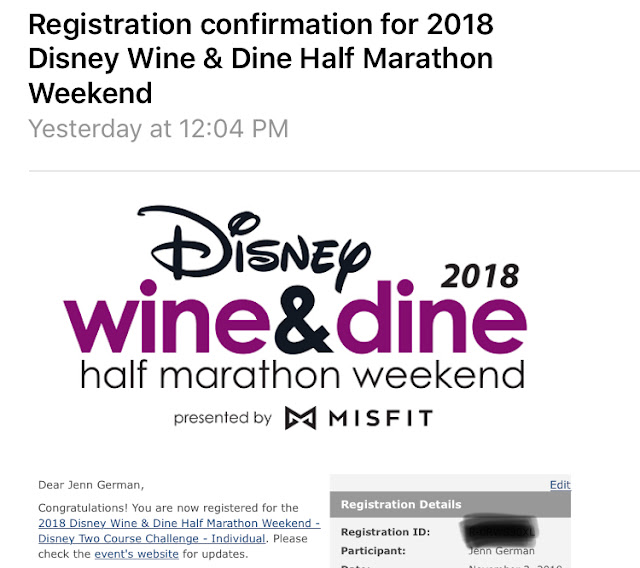 I know! I'm surprised too. But - and prepare for a real shocker - it wasn't my idea.

See, the week after I got back from the Walt Disney World Marathon, I was in the dressing room at ballet chatting to a friend about my race. Another friend, Erika, piped up that she'd always wanted to run a race like that.

WELL, I said, always eager for the opportunity to spread the gospel of runDisney, if you want, you can come with me for Wine & Dine weekend! And she expressed interest, so I emailed her the details. She was more confident about the 10k, and I told her if she wanted I would be happy to run it with her - but she had to let me know in advance so that I knew to sign up for both races.

But you know how these things go - when it comes to trips and running, many talk the talk but very few walk the walk. Registration approached and I hadn't heard anything, so I assumed Erika had decided not to go. All good! Totally understandable. But I was all set to sign up for the half only.

So imagine my surprise when Erika emailed me the day registration was originally supposed to be and asked me why it wasn't working! I have her the details on the pushed registration date, and she told me she was not only in, she wanted to run both races. Without any provocation whatsoever!

And that's how, against all odds, I found myself registering for the Two Course Challenge. I was nervous because Erika came in a little late to registration, but it turns out I didn't need to be; as of this writing both the half and the challenge are still open. Weird. But who cares? We're both in and it's gonna be awesome!

Clearly my powers of persuasion are stronger than I thought. I wonder if they're strong enough to convince Erika to go in on matching costumes for the 10k...?

Don't forget, you can follow FRoA on Twitter @fairestrunofall. If you have any questions, leave a comment or email fairestrunofall@gmail.com. See ya real soon!
Posted by Jenn at 8:33 AM