In Which Jenn Shares Her Preferred IT Band Taping Method

Oh, man, I can't believe it's never occurred to me to tell you guys about this before! Well, I have told you about it before. But obliquely. You need the details.

Q: What the heck am I pattering on about?
A: Taping your IT band!

Your IT (iliotibial) band, for those who are uninitiated (lucky you), runs along the hip and knee and is vital to stability while running. But I'm not a doctor, so I'll just leave this Wikipedia article here. I mean, I assume Wikipedia is a doctor.

You may recall my personal IT band began acting up last fall, riiiiight before the Baltimore Marathon. You know, just the sort of timing we all dream of. I tried taping it with KT Tape a la the approved method, which is this:

It kinda helped, but even with rest I was going into the marathon with trepidation. Enter my hero: the lovely guy who taped me up at the Baltimore Marathon expo's KT Tape booth.

Yes, he was an official KT Tape representative, and you would assume he would perform all his tapings in the official KT Tape manner. I know I expected it. But lo, a miracle - instead he did this: 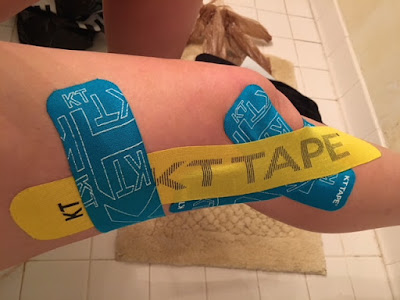 And OH MY GOD, guys, it helped. It helped SO MUCH. Indeed, so much did it help that by the time I finished the marathon my IT band had stretched itself out with such perfect support it was cured. (My other one was a different story but whatever).

Turns out, he WAS using an official KT Tape method, more or less - just not the most obvious one. While the video above is labeled "IT band pain," this one is more generically "outer knee:"

The funny thing? The original video now links to the outer knee video. But neither video is quite right, because my expo guy inserted a twist. He added an additional piece of half tape at the top, and with 100% stretch to boot (see above photo).

Said the rep when he taped this bit: "This is the only time I ever place tape with 100% stretch. It's so that when the full strip pulls it has something to brace against." Or something like that. The point is: only 100% stretch this piece!

One more thing: last time I got my IT band taped at the KT Tape booth, at the 2018 WDW Marathon, the employee did it in the original, not as good style. I ended up taking it off and putting it back on my way. Don't be afraid to specify the style you want!

Disclaimer: As I said, I am not a doctor. I'm not even a licensed professional of any kind. I'm just a girl regurgitating something I learned once. Follow my lead at your peril!

Don't forget, you can follow FRoA on Twitter @fairestrunofall. If you have any questions, leave a comment or email fairestrunofall@gmail.com. See ya real soon!
Posted by Jenn at 8:14 AM