In Which Jenn Shops At Disney Springs & Tries Blaze Pizza

When formulating my plan for a conference trip to WDW, I knew I wanted to use my free night to explore Disney Springs. I had merchandise- and food-oriented missions, and what better place to bask in the WDW glow if you don't want to shell out for a park ticket?

Still, I go back and forth on whether or not I played it the right way. As I noted in my haul(ish) post, most of the souvenirs I wanted turned out to have been in the airport Disney gift shop the whole time, if I'd only known. And I prioritized hanging out with, like, people instead of hardcore park touring, which is so not me. Should I have ditched the peeps and spent my evening in the California Grill bar waiting for the fireworks?

Eh, maybe. But I had a good time this way too. And as I like to remind myself: THERE WILL BE A NEXT TIME FOR YOU, DUMMY. Not everyone gets to say that.

Where was I? Oh yes, Disney Springs. My coworker SM was interested in accompanying me, as were her kids, so SM and I hung out in a vendor-sponsored company happy hour while waiting for her progeny to shower and stuff. Then it was off to the Springs!

Our first stop was of course World of Disney, where I picked up all my annoyingly rose gold items. It was bustling in there despite the construction, and we snaked through the crowds to locate my all-important ears. I was briefly tempted by the super-sweet sequined rainbow ears, but ultimately decided to stick with my original Holy Grail choice. Maybe next time!

(Relevant question: how many Minnie ear headbands can one reasonably purchase before one officially has a complex?)

Apparently my enthusiasm for WDW was catching (HELL YEAH IT IS), as SM's daughters decided they wanted ears too. We carefully considered the options before the older daughter selected a pair of the velveteen ears with the fabric dotted bow. The younger one chose a pair of those super deep pink/magenta ears with the circular sequins.

Armed with our purchases, I took our loot over to the register and bought all of it because even when I don't have an annual pass I have a small secret shopping weapon - my Disney Visa still nets me 10% off merch purchases of $50+. SM payed me back later and everyone won. 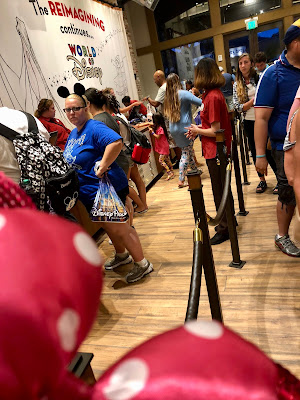 Next up, my secondary mission: off to Basin for shampoo and conditioner bars! Using bars instead of bottles hair products helps the environment, so I decided to give it a shot.

I tracked down a Basin person, who helped me select two shampoos that would work well with my fine, wavy hair. As for the conditioners, she informed me that they were all the exact same formula - it's just the scent that changes. I picked two I thought I'd like and popped them in a canister for travel.

Meanwhile, SM and company were having a fabulous time smelling the smells, as it were. SM chose a soap she liked, while the girls busied themselves putting together those DIY canisters of multi-colored bath salts. Once again, by combining our purchases we were able to get a Disney Visa discount.

By that point, it was getting late - well past food o'clock. SM and family are largely vegetarian, so I recommended Blaze pizza as a good choice for dinner, as I'd heard good things.

I wound up going with the Veg Out pizza (boy, those calorie count numbers really mess with your selection, eh?). This particular personal pizza featured roasted seasonal veggies, mushrooms, red onion, mozzarella, gorgonzola, and red sauce dollops. That last is very important to me; I am VERY pro-marinara on my pizza. 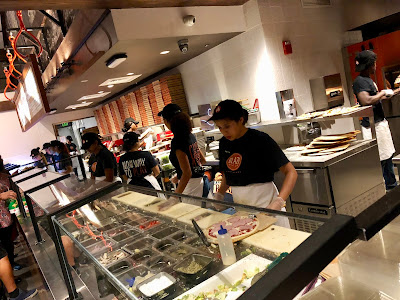 Too late I remembered two things I should've done per the reviews: upgrade to thicker crust and sub in the spicy red sauce for regular. But by that point I was already at the register. Oh well!

As it stands my pizza was pretty good. The crust wasn't too thin, and the the toppings were solid although unremarkable. I definitely could've used that spicy red sauce, though. As it was the regular was kinda bland for me. If in Disney Springs and hankering for counter service I think I'd rather try D-Luxe burger in the future, but for a quick dinner Blaze did the job. 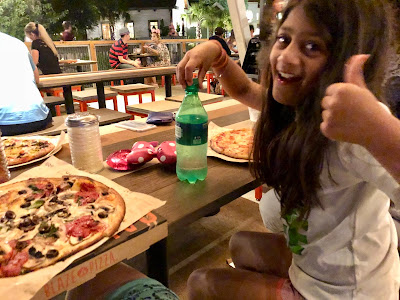 We debated sending the girls home alone and grabbing a drink somewhere, but ultimately decided all banding together would be simplest (and anyway I planned to run in the morning). A quick bus ride later and we were back safe at the Swolphin.

All in all, a successful evening. Part of me wonders how very much more I could've gotten done if I'd simply struck out on my own, but hey, I traverse WDW solo on race trips all the time. Why not enjoy the company of others for once?

Tune in next time for more conference trip shenanigans, including runs on the Boardwalk and a private party in Epcot!

Don't forget, you can follow FRoA on Twitter @fairestrunofall. If you have any questions or thoughts, leave a comment or email fairestrunofall@gmail.com. See ya real soon!
Posted by Jenn at 8:01 AM