In Which Jenn Attends A Private Party In Epcot

Somewhere up there in Conference Heaven loves me: not only was my conference at the Swolphin, but there was a wrap-up party... IN EPCOT!!!! I know! It's like they planned it just for me!

Our evening began by entering Epcot via the International Gateway, our badges being our ticket in. We were herded over to World Showplace, the cavernous building between the UK and Canada that's exclusively used for private or hard-ticket events. The only thing I can think of that it hosts on the regular is the hard-ticket Party for the Senses during the Food & Wine Festival, so I was hella jazzed to get a look inside.

Not that the building is designed with much beyond "get a bunch of people in there" as far as I can tell; it wasn't much more decorated than any ol' hotel ballroom. There was a stage for the band, accompanying screens, and some vaguely interesting sculptures hiding the bathrooms, but that's about it. 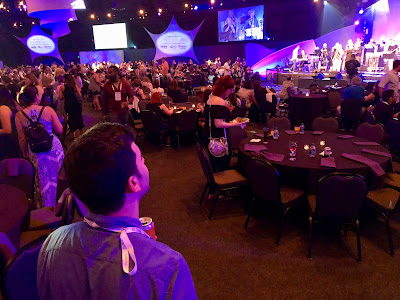 Nevertheless, the Disney magic began almost immediately. As we entered the area, waiters stood scattered about offering trays of drinks. This is not uncommon in the conference and wedding functions I've attended; if you can get most people to take a drink you've already got, they won't crowd the bars immediately.

But this time was different. Because among the alcohol offerings... was SCHOFFERHOFER GRAPEFRUIT BEER! Yes! The same delicious beer-grapefruit juice hybrid with the cult following that I myself have paid actual money for at the Germany pavilion! And they just GAVE IT TO ME!

Alas, I wound up drinking only one. But that's only because when I later approached the bar for a second libation, I saw they had POG juice with rum on tap. I had specifically earmarked this as something I wanted to try from DAK's Dawa Bar in November. Now I didn't have to wait! Or pay money for it! (Although I just read they changed up the mixers on this one at Dawa, so I'll need to give it another go on my next trip. You know, for science.) 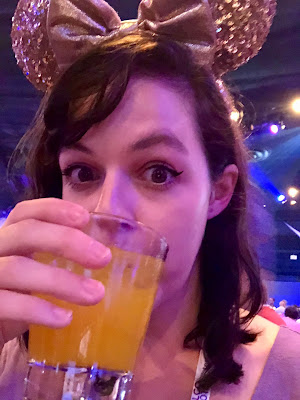 It was with slow delight it dawned on me: all the catering was from standard WDW menus, too. Some things I sampled in between flailing and screaming out the provenance of every dish to confused onlookers, I ate: 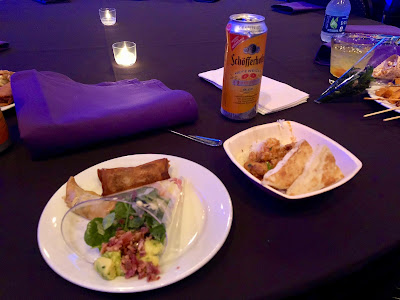 There were other selections too that never made it to my personal plate, including meatballs from Mama Melrose. But we had earlier been informed that the desserts would be bonkers good, and I was paralyzed with fear. What if I ate too much of the savory items and was too full for, say, unlimited school bread???

I needn't have worried - if the desserts were from any area of WDW in particular, they eluded me. There were coconut and watermelon sorbets, some sort of panna cotta with berry topping, and an admittedly rich and delicious chocolate cake pop. Yet my expectations had been cruelly raised by those cheeseburger egg rolls, and I was wholly unsatisfied by the lack of signature cupcakes, 'Ohana bread pudding, troll horns, homemade ice cream sandwiches, etc. 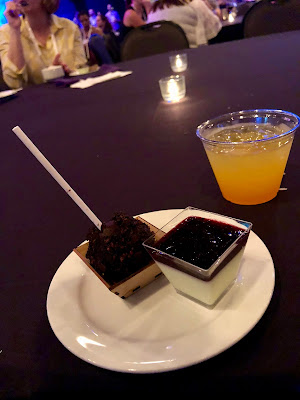 No matter - after drowning my sorrows in several more POG juices with rum, it was time to head over to our private viewing areas for IllumniNations! They had a Canada viewing open for us but also the central location in front of the bridge to Futureworld; I led my group to the latter as I know that the show was designed to be ideally viewed down the middle. 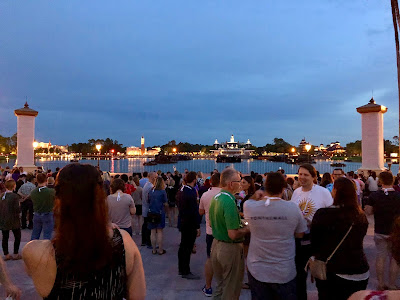 There were bars set up for us in the viewing area, so we grabbed glasses of wine and headed over to the railing to watch the show. IllumiNations isn't my favorite nighttime spectacular (hello, Happily Ever After!), but it still gives me the warm and nostalgic fuzzies. In particular I love the parts where the lights go out at the very beginning, and then when the string lights around the pavilion buildings start to go on in the middle. My heart was very happy as the show ended. 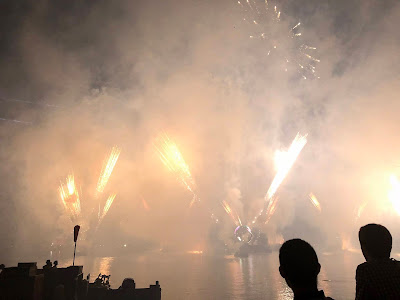 But wait, there's more! Some conference sponsors were paying to keep a couple rides open for us. I managed to talk my coworker SM into trying Soarin' even thought she is staunchly anti-thrill ride. Admittedly she started screaming when our gliders began to rise, but ultimately she was fine.

She was a firm no-go on Mission: Space and Test Track, though, so just new conference buddy JR and I went through those too. We did Mission: Space on the orange side because we are more intense, although can I just say that Gina Torres does an extremely lackluster job introducing the ride? I miss Gary. :/

After that it was about 11pm, and while those three rides would be open for one more hour I allowed myself to be talked into going back to the hotel. Part of me regrets that, but the other part of me knew that I planned to run in the morning and needed to go to sleep. Both versions of me loved wandering back to the Swolphin from the International Gateway - I can see why you Epcot resorts people love it so.

Visit again soon - I still need to tell you about my training runs on the Boardwalk!

Don't forget, you can follow FRoA on Twitter @fairestrunofall. If you have any questions or thoughts, leave a comment or email fairestrunofall@gmail.com. See ya real soon!
Posted by Jenn at 7:41 AM