In Which Jenn Does Training Runs On Disney's Boardwalk

I knocked out a 14 mile run in the gym of the Dolphin resort because I knew that I didn't want to mess around with Florida's heat and humidity for that amount of time without character stops, y'know? But for two subsequent training runs, I dragged myself out of bed in comparatively cool hours of the morning to run Disney's Boardwalk.

How can you complain about an early morning run there? If you're early enough, the string lights on the Boardwalk might still be up. The sun rises over the Yacht & Beach Club as you crest the bridge and take your first steps onto the boards. 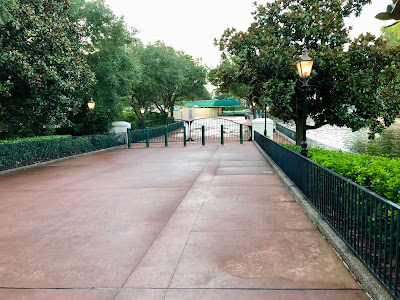 The Swolphin offers run route for one mile, two miles, and a 5K. We covered the 5K in my recap of the conference race. For my training five milers, I eked out the mileage with some doubling back. I said hello to the Tower of Terror twice and, the second morning, did a few loops in the vicinity until the gate to the International Gateway was unlocked and I could take what turned about to be a scant few steps there. 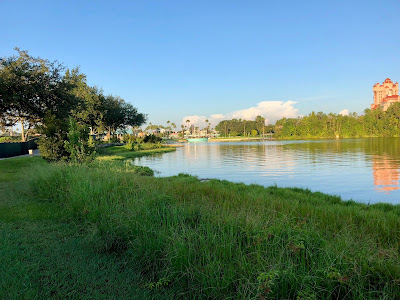 So yes, I think we can all agree the Boardwalk is an excellent place to run because of the location. But as it turns out, the Disney magic creeps into the people too.

One my two training runs, there was an older gentleman taking a walk around the Boardwalk at the same time. Every time I passed him, he cheered and clapped for me like a spectator at a legitimate race, with sincere enthusiasm. The second day, the last time I passed him, I turned around to offer a high five, which he met with vigor.

See, even awkward weirdos like me can make friends while running! Truly it is a magical sport in a magical setting.

Don't forget, you can follow FRoA on Twitter @fairestrunofall. If you have any questions or thoughts, leave a comment or email fairestrunofall@gmail.com. See ya real soon!
Posted by Jenn at 7:42 AM