In Which Jenn Recaps The Fast & The Fierce 5K

I waffled about signing up for The Fast & The Fierce 5K for a couple weeks. It was put on by the Friends of the National Zoo as a benefit for rhino preservation. While a zoo race sounds delightful, the course wasn't actually through any portion of the zoo. But by the Wednesday before the race the weather forecast looked unseasonably delightful, so I went ahead and impulse-registered. If nothing else, that's $40 more for the rhinos!

The race start was Metro accessible, but the timing made me nervous - if I took the first train at my station of the day, I'd only arrive 15 minutes before the race. Fine if I knew exactly what I was doing, but as a high-anxiety person I decided to pick up a Lyft instead.

Well, the pre-scheduled Lyft I was assigned took 23 minutes to arrive at my apartment! Yikes! Luckily I still got to the race start in plenty of time (thank you, early morning traffic patterns), but that was kind of nerve-wracking. I think if I run it again next year, I could get away with the Metro now that I know where I'm going and what I'm doing. 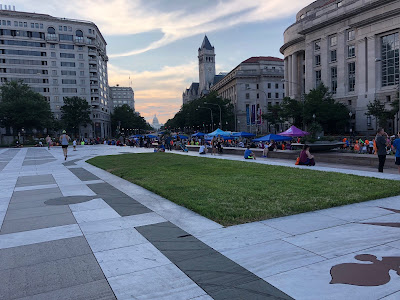 The start area was very well organized, with a bag check and morning-of bib pick-up for the people who aren't high-anxiety. The crowd milled around Freedom Plaza - and some of the crowd included dogs! The race was pet-friendly, yay! I pet the prettiest shepherd/greyhound cross and wandered off in a great mood.

The pre-race email had encouraged costumes, so I had dolled myself up in my Big Cat best for the occasion. I was surprised to see how few people were dressed up, though. I mean, there was definitely a costumed presence, but the percentage was much lower than I might have expected. Serious runners! 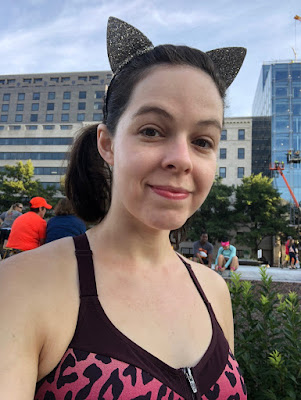 My only real complaint about the race as a whole was the porta potty situation: there were four in the start area. Four! For over 500 people! Luckily I got in early, but the line was looking pretty bonkers as I took my place at the start line. (While we're on the subject, I don't remember seeing any porta potties on the course either, but then I wasn't looking for them so who knows.)

There were no corrals; everyone placed themselves at will. I set myself up a bit back from the start mats to let the really speedy people get out in front first. A quick rendition of the national anthem, and we were off!

As is sort of inherent in any 5K, there's not a ton to tell you about the course - after all, we were only on it for three miles! It was flat pretty much the whole way. which was nice. We started on Pennsylvania Avenue heading toward the capitol building before swinging a right and edging our way along the National Mall. We looped our way around a square of Independence Avenue and then headed back the way we came, with the peak of the Washington Monument peeping over the tops of the buildings. Then the finish line. The end!

Okay, some more details: there was one water stop in the middle, offering water only (no sport drinks or snacks). This was totally fine for me for such a short race but an extra water stop probably wouldn't've been terrible for August. The scenery was mostly just buildings and the mall, which, as a jaded lifelong DCite, was nothing much to me. But for someone from out of town it was probably super fun!

I personally had a very solid race. I did start out a liiiiiiittle too fast, but backed it off for the second mile and was able to deliver a negative split for mile number 3. I managed a sprint to the finish with a chip time juuust under 26 minutes. Goal A achieved!

Volunteers were handing out medals at the finish, which were super cute in embossed wood: 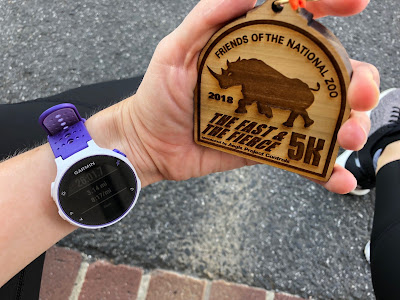 There was water, bananas, and granola bars at the finish, plus a couple vendor tents. A credit union was wisely handing out tech towels, and a juice company had samples too.

There was an official after party at the zoo, but you had to get back on the Metro and then walk a couple blocks to get there and I was all sweaty. Once I was on the Metro all I wanted to do was go home and shower. It's a nice zoo, though - I'd recommend it if you've never been!

I don't usually go out for 5Ks, preferring longer races that can count more toward my training, but The Fast & The Fierce 5K was nice. It was well-run, the course was nice and flat for PR pursuit, and the chipped bibs were a nice touch. Recommended!

They should look into making it at least partially in the zoo, though. If Baltimore can do it, why can't they?