In Which Jenn Swims The Parks Half Marathon

"It's a biathlon," said man behind me to his running companion around mile 4. "We're swimming AND running!"

Not that any of us could be surprised - the forecast had called for rain on the day of the Parks Half Marathon for at least a week. It had rained the night before. When I woke up that morning, there was a steady stream raindrops coming down - but luckily nothing torrential.

So I slapped on a ballcap and a jacket, shoved my phone in a plastic sandwich bag, and headed out into the wet.

Pat's boss was also running the race and was kind enough to give me a ride; he's been running Parks for literal decades and assured me that he had run it in the rain in the past and it was fine. Potentially flooded in parts, but fine. The whole course was paved so I'd only get muddy if I went off-roading.

Not that I was too worried; it could hardly be worse than the Twilighter 8K, not to mention the Wine & Dine Half 2014, or that one time I got destroyed by car backsplash. I was a little apprehensive about the PR I was hoping for, but I figured the main thing was not to slip and break a leg.

Weather notwithstanding, we took off a few minutes after the 6:45am start time in the usual starting line crush. I lined myself up behind the 2:05 pacer guy, who would've been harder to keep track of in the crowd except that he had a booming voice and fancied himself something of a standup comedian. After some of the usual you-can-do-it pep talk, he launched into some jokes. Sadly, I lost him at the first water stop (I like to walk them), but I kept my chin up and kept going. 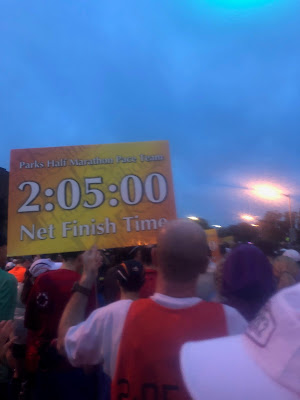 The first few miles wound through some local neighborhoods before we enter the woods of Rock Creek Park (major emphasis on the creek - it was practically a river with the recent rainfall). It was a little hard to control my temperature, but I kept zipping my jacket up/down/up/down and plugged away feeling really good.

The reality of the situation hit me around mile 4: I saw a guy sitting on the side of the trail cradling his head in his hands, a medic crouching over him. He looked long and lean, and I surmised that he was one of the speedy front-runner types - and in his speed had slipped and fallen on the slippery asphalt. This taught me greater caution and I was determined to proceed with care.

This mostly played out in the puddles. Now, I wasn't too bothered by the puddles - yes, I got wet and cold and splashed, but I was already wet and cold and splashed, so whatevs, y'know? But around mile 7 I started encountering puddles that were starting to turn into ponds. I'm talking six inches deep of water with no visible bottom. I feared that if I ran through them in the regular fashion I might catch on the uneven pavement, so I wound up high-stepping through them like some sort of demented Clydesdale. I probably lost a good 30-60 seconds in this fashion, but I also didn't fall on my face, so I'm calling it a win.

I pounded through a few more miles, up "high five" hill (where the high-five was station halfway up and I found that VERY MISLEADING), through a water station where I randomly ran into a coworker who was volunteering, and past a couple of magnificent spectators dressed as Mr. and Mrs. Incredible if Pixar had included ponchos in their costumes.

I was getting tired but keeping the pace... when I glanced down and noticed that my GPS watch had kicked out. I paused and unpaused it and that seemed to help, but I lost, oh, 3-5 minutes.

And as it happened, who did I see ahead of me? Why, it was 2:05 pacer guy! As far as I could tell he had lost basically his entire pace group, but maybe they were just straggling a bit. I ran up to him and requested his mileage count, he told me we had about half a mile to go, and I... ran ahead of him. Me! Ahead of the 2:05 pacer!

So that was nice. I funneled myself into the chute for the finish line, encouraged by local cheerleaders, and headed toward the end. The clock time showed 2:04 and change as I crossed, so even though my GPS was off I knew I was making my PR anyway. My official course time is posted at 2:02:59 - just made that 2:03 cutoff!

I immediately hit the bathroom and then found my friend and fellow runner Sarah. We grabbed some watermelon from the massive amount of available post-race food and then proceed to run the 4 miles home, just like last year. I mean, it's not like we could get any wetter.

Have you ever run the Parks Half? Just exactly how the hell am I supposed to run a half under 2 hours, anyway?

Don't forget, you can follow FRoA on Twitter @fairestrunofall. If you have any questions or thoughts, leave a comment or email fairestrunofall@gmail.com. See ya real soon!
Posted by Jenn at 8:10 AM