In Which Jenn Recaps The 2018 National Capital 20 Miler

I have knocked out a fair number of 20 mile runs in my day as preparation for a marathon. Some have been treadmill runs; others were outside. But I can tell you with certainty there's nothing like the serenity that comes from knowing that somebody else is in charge of providing your snacks and water.

Which is why I wound up at the start line of the National Capital 20 Miler for the third time, already with the knowledge that I was looking at a boring out-and-back course BUT also water stops and Clif Shots. A worthy trade if you ask me.

I rolled out of bed at 5:15am on Sunday morning, collected my running buddy Sarah, and drove over to the Carderock entrance of the C&O Canal Towpath. We arrived about an hour before start time, which gave us plenty of time to pick up our bibs and then chill in the car. I felt less silly about insisting on arriving so early when I saw how quickly the parking lot filled up, with latecomers parking in the woods and along the road.

After a quick bathroom break (in a real bathroom, no less; another point in this race's favor) we took up position at the start line. Conditions were good, partly cloudy with temperatures rising from the high 50s to the low 60s, but recent rainfall promised some muddy portions.

A race announcer tried to yell something about detours prior to the start, but we were too far back to hear; we figured we'd just follow the runner in front and hope for the best. Unfortunately this distracted me from starting up my GPS watch until right before the race started, and I didn't get a signal until about halfway through. Oh well! My split times would just have to be approximate.

Anyway, the race started and Sarah took off like a shot. Feeling more cautious about keeping a consistent pace across a whopping 20 miles, I settled into an easy jog, not making too much of an effort to go around people unless they were very slow.

We came upon our first detour, which sent us over a bridge and onto a makeshift and tragically muddy mulch trail. The soft ground slowed me down, but luckily it didn't last too long and I was back on the regular C&O Canal path. 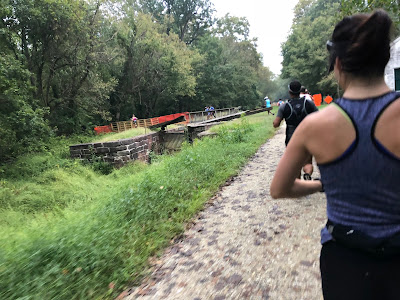 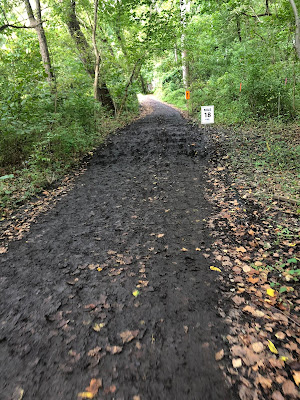 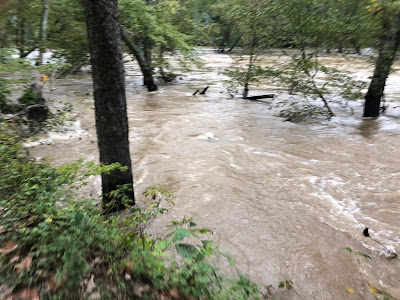 A few miles later there was an even weirder detour, which was a canvas semi-circle out onto the
canal itself. It was soggy and bouncy and made keeping your footing a challenge, but at least it was short. 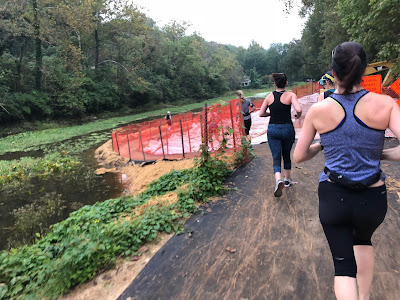 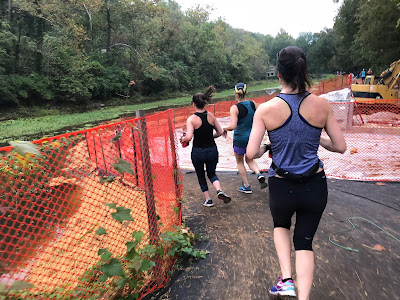 A little after the mile 7 marker we started to see the front runners coming back down the trail... but also people with different bibs? Turns out there was a different race going on in the opposite direction on the same day. This wouldn't have been so bad expect that around mile 8 we started encountering some pretty big puddles with narrow paths of comparative dry footing around them. Sometimes you were in competition with the other racers for the space, and I was nearly shoulder-checked on more than one occasion. Irritating but what can you do.

Finally I hit mile 10 and the turnaround point, where a lovely volunteer handed me a Clif Shot. I took a brief walk break to consume it before taking off again, this time toward the finish. That's the one nice thing about an out-and-back - at least one you hit the and-back you can tell yourself that ever step carries you closer to home.

Around mile 5 I overheard a girl in front of me mentioning she needed to use the bathroom, which made me realize I needed to pee. Unfortunately I hadn't encountered a single porta potty on the way up, which a) seemed like a huge oversight and b) meant there wouldn't be one on the way back. Or so I thought. Just as I was beginning to scope out a place in the woods to hide I saw hidden porta potties across a bridge just before mile 13. You'd never see them on the way out without craning your neck to see around bend, but coming back they were plain as day, and I enjoyed sweet relief.

I also took this moment to pop in my headphones, and the combined pleasures of an empty bladder and uptempo music gave me a second wind. A little after mile 15 I gave myself the added boost of switching on the soundtrack to the Happily Ever After fireworks, and that beautiful musical creation galvanized me to such an extent I was passing people. Such is the incredible power of Disney.

So far, against all odds and historical precedent, I was coming up on mile 17 without having walking outside of the scope of a water/Clif Shot stop. Could I make it all the way? After a brief rendition of the IllumiNations soundtrack I went back to Happily Ever After for its miracle boost, and although the second hit is never as much of a high as your first it was enough to push me across the finish line in an official 3:27:52. This is like 15 minutes faster than last time, so I'm pretty darned pleased with myself.

Sarah had finished ahead of me, and we grabbed some snacks (they had a pretty good spread) and water before heading home. All in all a successful outing. Here's hoping it's a good omen for the Marine Corps Marathon!

Don't forget, you can follow FRoA on Twitter @fairestrunofall. If you have any questions, leave a comment or email fairestrunofall@gmail.com. See ya real soon!
Posted by Jenn at 7:37 AM