Hello and welcome to my 2018 Wine & Dine Half Marathon weekend trip report! It begins, as just about all my trip reports do, with me getting practically no sleep the night before. I met up with my trip buddy Erika, and my dad drove us to the airport. No problems, easy flight. As Mary Poppins says, well begun is half done.

Our plane landed a bit early, and we marched right on down to the Magical Express stop, which whisked us off to Pop Century. In an unprecedented turn of events, I received a text that our room was ready before we even arrived at the resort. It wasn't even 9:30am. World record!

After a quick stop at the food court for breakfast, we popped into our room to drop our stuff and change. This was my first time in a Pop room since renovations, and I must say, I was pretty into it. The overall vibe was much nicer, with such perks as sliding wooden doors, an adorable murphy bed, a lit makeup mirror, and a coffee maker (but no coffee - I guess you have to bring that yourself). 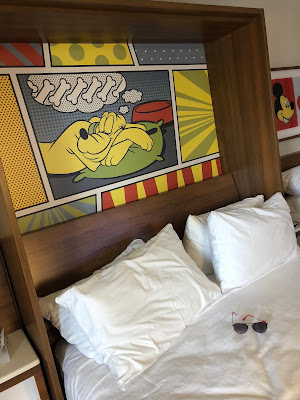 I did find later, however, that the walls are thin as all hell; you can hear every exclamation and toilet flush from your neighbors. I suppose nothing's perfect.

From there we headed out to the race expo. Bib pickup and official race merchandise lived in the new stadium building, and everything proceeded smoothly. Erika and I were both registered for the Two Course Challenge (10K + half for the uninitiated), so we had our photos taken so they could ID us for our challenge meddles after the half. 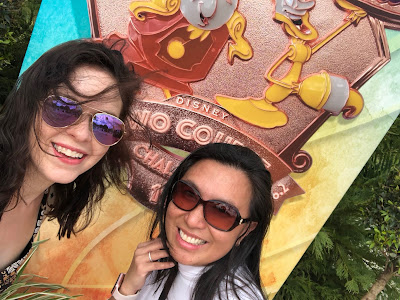 We poked through the merch, of course - and, also of course, the only thing I liked was sold out in my size. :/ Erika picked up a pretty cute race jacket, though. I would've been tempted by it too but I thought it was too similar to the jacket I got for last year's WDW Marathon.

Next it was off to the expo hall for shirt pickup and vendors. We took a spin or two around the hall before snagging a direct bus to Disney Springs. 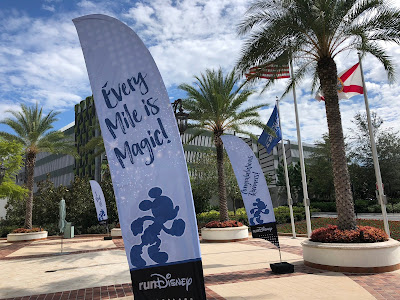 Our first stop was the newly redesigned World of Disney, and boy is it different. As far as I can tell they knocked down just about all the internal walls, which makes the place much easier to navigate. I wandered around coveting Minnie ears before finally deciding to indulge myself in the Minnie bow sunglasses I've been eyeing up for like three trips now. This is like my third pair of aviators but the bow is SO CUTE! :D (See above.)

We exited WoD near Basin, so that naturally became our next stop. They have a discount for runners, but I ultimately decided to hold off on making any purchases until my 2019 marathon trip. I only just started using my Basin shampoo bars and I want to make sure I love them in the long term before I buy again, ya feel me?

I next led Erika into the Marketplace Co-Op and straight back into that Holy Grail of Disney girliness: The Dress Shop. I want every single dress there; if only they didn't cost a million dollars apiece. I wandered around running my hands along skirts covetously but talked myself out of making any purchases just yet. Erika did buy herself and her daughter matching Snow White dresses, which are freakin' adorable. 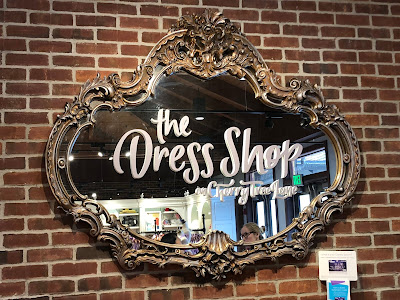 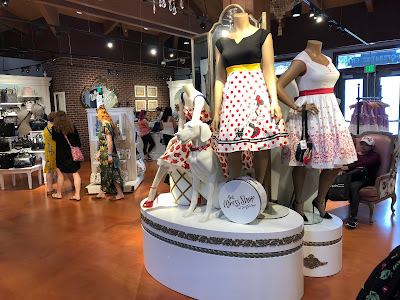 We poked around the rest of the Marketplace stands before setting off in search of food. AristoCrepes was our destination... and it was closed. Curses! Instead we drowned our sorrows in some sodas and a split Earl of Sandwich concoction, but it wasn't the same.

Erika had neglected to pack a swimsuit, so we wandered through Uniqlo and Zara in the hopes of locating something cheap. Unfortunately both stores seemed to be laboring under the misapprehension that winter is coming, Florida included. It was fall collections as far as the eye can see. Useless! 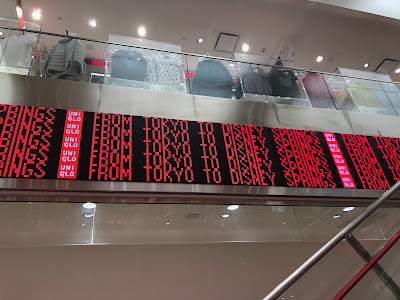 This brought our Disney Springs adventure to a close. We hopped on a bus back to Pop and went back to the room to lay out our race stuff for the morning. Erika snuck in a nap while I puttered around and formulated the morning's plan.

As is Florida's way, a hardcore rainstorm came through, but it eventually slowed to enough of a drizzle that we could safely head to the food court for dinner. We grabbed some carbo-loading pasta and then chilled in the room until it was time for bed.

And then I lay awake for who knows how long freaking out about waking up on time for the morning's race. The more things change and all that.

Well? Did I wake up in time? Find out in the next installment!

Don't forget, you can follow FRoA on Twitter @fairestrunofall. If you have any questions or thoughts, leave a comment or email fairestrunofall@gmail.com. See ya real soon!
Posted by Jenn at 7:57 AM