After the 10K, Erika and I headed back to the room to shower and eat some of our snack boxes. My initial plan was to head right out to Epcot as soon as we were ready, but it was chilly outside and I was kind of exhausted so we elected to take a nap instead.

About 90 minutes later we dragged ourselves out of bed, dressed. and snagged a bus to Epcot. We got the bus pretty quickly - but getting to Epcot was another story. I don't know what the deal was, but it took us an hour to get there from Pop. As far as I could tell it was a simple matter of tons of people all trying to get into Epcot at once, which I guess is plausible given it was a Saturday during Food & Wine Festival, but still. Yikes.

At least I was able to use the time riffling through FastPass availability, and by the time we arrived at the park we had Spaceship Earth and Soarin' FPs waiting for us.

We went straight to Spaceship Earth to start, and thanked the Phoenicians accordingly. I hear that SE is set to go down for a serious refurb soon, and I can't say it upsets me - the descent animations, while fun enough, have outstayed their welcome.

From there we headed over to World Showcase, which was, unsurprisingly, insanely packed. But when your schedule demands you go on a Saturday and suck it up, y'know?

We started in China, where we both picked up delicious duck bao buns. I also grabbed a jasmine beer, which I wound up liking enormously. It was kind of like someone mixed a Natty Boh with a bit of jasmine tea. I was unexpectedly into it. 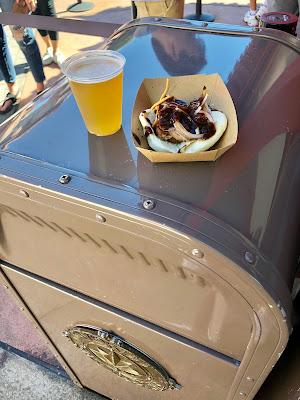 Erika almost bought a bubble tea at the festival kiosk, but upon expressing disappointment with the proffered flavor I rerouted her to the Joy of Tea stand where she liked the offering better. And that's why you should always travel with a Disney professional, folks.

Post-bao buns we kept on walking along and poking around kiosk menu, but the lines were so long we skipped just about everything. Japan was curiously abandoned, though, so we hopped in line just as the taiko drummers were starting. I picked up the log o' sushi aka an uncut spicy tuna roll. It was pretty good but I'm not a huge fan of mayo-based sauces with sushi; too creamy. Soy sauce all the way!

Next we carefully perused the France kiosk as Erika is fond of their cuisine. When she mentioned being particularly into the pastries, I turned our tails and marched her into Les Halles where she wound up selecting two very photogenic little numbers. 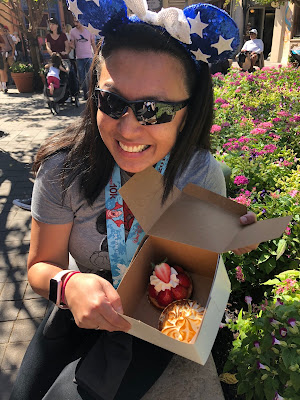 By that point our Soarin' FP time had opened up, so we headed over to the Land for a quick spin with Patrick Warburton (also I bounced through Club Cool because I need at least one sparberry fix per trip).

After that I managed to fit in something I've been meaning to do for forever: the Disney Visa character photo spot in the Imagination pavilion. There was a bit of a line but nothing nearly as bad as you would encounter in a regular photo op. One 10-15 minute wait later and we were greeted by Pluto and Minnie, the latter of whom mimed great excitement over our medals. She knocks out a mean running man, let me tell you. 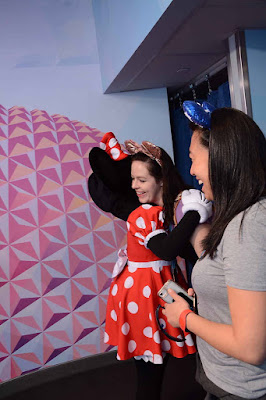 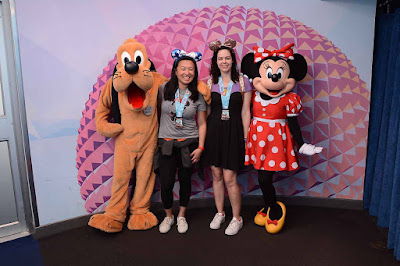 While waiting I had picked up a Living with the Land FP, so we took a leisurely trip through the greenhouses before heading over to the Festival Center to hit up the mimosa bar. We both ordered tropical mimosas, although officially Erika did not receive one because she forgot to bring her ID. I 100% drank both and definitely didn't hand her one and call it done. Believe it!

We wandered through the Festival Center as we sipped, taking in the bustle of the vendors and demos. The merchandise area was interesting, especially vis a vis Figment, but despite my love for him there wasn't anything I could really justify buying. Once you have Figment ears, what more do you need? (A Dress Shop dress, maybe? Ooh...)

I ran through FP availability again but nothing looked particularly good, so we rolled through Test Track single rider. It took us about 30 minutes but considering the regular wait was over an hour it wasn't that bad. I auto-generated a car before getting on the ride but it was a total loser across the board. Boo. (For those who don't know, if you haven't designed a car you can touch your Magic Band to the podium anyway and the system will quickly mash together a random car for you.)

Ever the power user, I had miraculously snagged a Frozen Ever After FP for a mere 1.5 hours away while waiting in the Test Track queue, so we gloated our way back to World Showcase.

Our first act was to hit up the American Adventure, where we just missed the Voices of Liberty but did have a chance to check out the nifty new Native American gallery exhibit. Then we took in the show, where I was pleased to entertain Erika with my dramatic hand gestures during "Golden Dreams." If only we'd sat in the back row I could've indulged in some over-the-head action.

We trotted on back to Norway for Frozen FP and some front row action. I must admit I quite like this cute little ditty even if I do miss the Maelstrom. World's most underwhelming on-ride photo, though.

It was getting on in the evening, at least as far as Two Course Challengers were concerned, but we weren't quite done yet. Since it was so close, we decided to walk over to China's Temple of Heaven. We poked around the Shanghai Disneyland exhibit before taking in the China movie. It's a pleasant little film - I'm glad I watched it one more time before the replacement shows up.

Erika still had some bounce in her step, so I led her over to the Food & Wine Festival corridor area in Future World. We snagged some of the bacon mac and cheese, which was quite good, although different form how I remember. This version was served in a neat scoop, and by consequently felt more densely packed and less cheesy. But there were definitely some good flavors there. 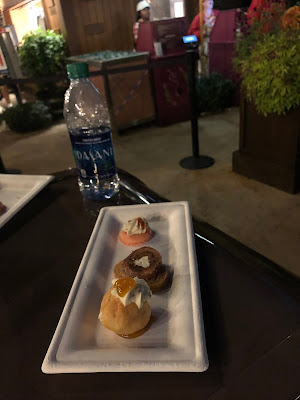 We also both picked up a cheese trio, which was kinda weird. The cheese and strawberry macaron was kinda of bizarre, with the sweet strawberry contrasting oddly with the herbaceous cheese. The cream puff has a similar flavor profile, if not quite as pronounced on the sweet end. But the smoked salmon one in the middle was straight up savory, and I enjoyed it very much.

On our way out we popped into Mouse Gears so I could potentially grab some souvenirs, but it was so crowded I immediately got overwhelmed and made a hasty exit. There would be time for purchases tomorrow.

We quickly caught a bus back to Pop, swinging through the food court for a few more provisions before settling in our room to prep for the morning's half marathon. Pitch Perfect sang us to sleep. Okay, it sang Erika to sleep. I tossed and turned like a paranoid lunatic as per usual. The important thing to remember is that I'm consistent.

Next up: The Wine & Dine Half Marathon!

Don't forget, you can follow FRoA on Twitter @fairestrunofall. If you have any questions or thoughts, leave a comment or email fairestrunofall@gmail.com. See ya real soon!
Posted by Jenn at 7:55 AM