The Fairest Trip Report Of All: Kidani Village & The Race Expo

I'm gonna split this trip report up a little differently than usual - rather than go strictly one day at a time, I'm going to separate out the posts by individual activity. That being said, day 1 was very chill, so I'll be pretty comprehensive with this first foray. Onward with the trip report!

This tale of Walt Disney World begins as they always do: with a trip to the airport at an ungodly hour. Despite not planning to check a bag, I left extra early in case the government shutdown was causing a bad backup at airport security. It wasn't, but it never hurts to be prepared!

My flight was delayed by faulty wiring, but we made up the time in the air and landed just about as scheduled. I hightailed it over to the Magic Express stop, where I hopped aboard a bus with my fellow travelers. I wound up being the only person headed to Kidani Village - by the time we arrived, I had the bus to myself!

I hadn't received a text from Disney that my room was ready, so I found an out of the way bathroom, changed, got tarted up a bit, and headed over to the expo. Once again, I was the only person on the bus! Kidani sure is tiny to a girl used to value and moderate resorts. 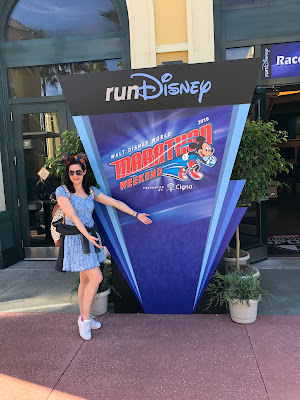 The bib pickup area was pretty quiet with only the marathoners still to go, and I had my bib in no time flat. From there I headed over to the exhibitor hall to grab my race shirt and check out the vendors. I did a quick lap to get the lay of the land and picked up some Clif Shots (mocha, natch) at Track Shack before settling into the KT Tape line.

Which took foreeeeeever. Last time I got taped up you had to buy a roll to qualify and the line was practically nonexistent. Well, not only did they revert to making it free for anyone, they were taping multiple body parts (it used to be only one) and explaining how to do it as they went along.

Which is all well and good from the standpoint of generosity, but the end result was that it took over an hour before it was my turn. And then when it was my turn, I had a very nice and personable lady who didn't tape my knees to my liking. I wound up ripping it all off and redoing it myself later that day. Oh well - it's not like I had anywhere to be!

You know who would make me feel better and lives around there? 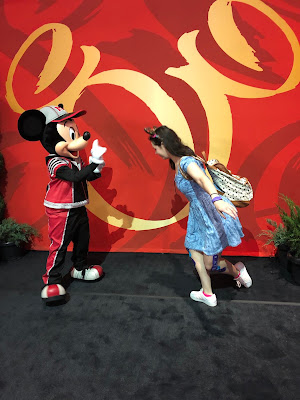 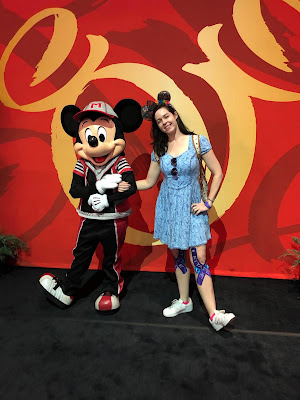 Mickey pantomimed he liked my dressed and requested I do a spin! And then I curtseyed because spinning is a ballet thing and autopilot kicked in.

It was lunch time by that point, but first I wanted to investigate the official merch, which is now housed in a separate building. I gazed longingly at the runDisney puffer jackets, but the $90 price tag gave me pause. There was still plenty of inventory, so I decided if it was meant to be it'd be in the merch tent after the race. (It wasn't and I was sad, but that's $90 I didn't spend. Maybe next time?)

That about wrapped up my expo to-dos, so I picked up a bus back to Animal Kingdom Lodge, getting off at Jambo House for lunch. I got a little lost trying to find The Mara - it's a bit of a labyrinthine route. But once I was there I was able to pick up a falafel platter and enjoy lunch outside. (The Mara review coming later on!) 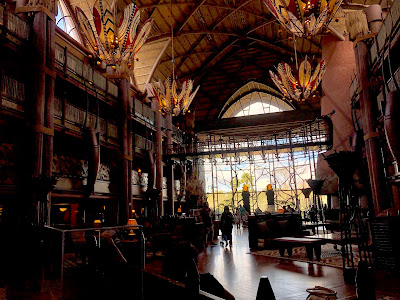 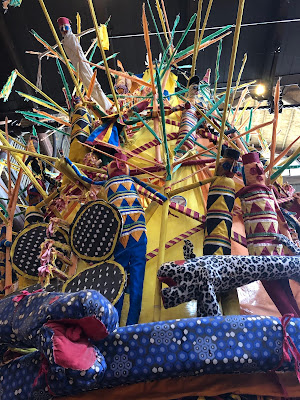 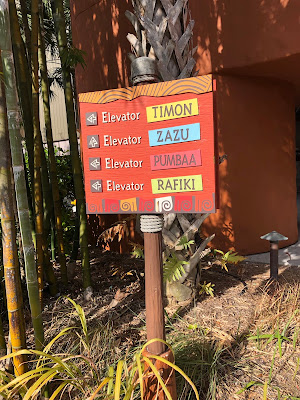 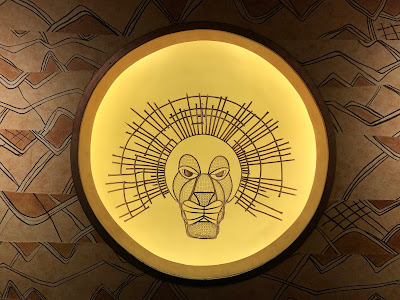 By that point my room was ready, and I took a quick spin around the savanna observation before walking back to Kidani and taking a look.

This was my first time staying for any real length of time in a deluxe-tier resort, and it was a definite upgrade. I had a balcony, for crying out loud! The themeing was rich but also classy, with a sitting space alongside the web. The bathroom was much bigger than what I was used to, and offered individual tubes of H2O products rather than the dispensers in the value resorts. I rented DVC points for the room, so it was also set up with a very bare-bones kitchenette with a microwave, toaster, and coffee maker plus real glasses and mugs. 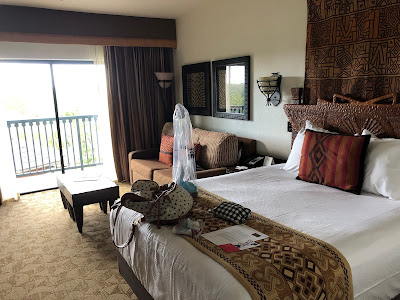 I scooted back out of the room to go pick up my checked bag, although I took a very meandering route that included a look at this side of the savanna before getting to bell services.

I hauled my bag back to the room and turned on some dumb hotel TV, which is a strange but well-loved activity of mine. Something about watching TV in a hotel feels good. Anyway, I was in luck - a soothing marathon of Say Yes to the Dress was on TLC, and I basked in the glow of the idiot's box while I prepped for my actual, physical marathon. 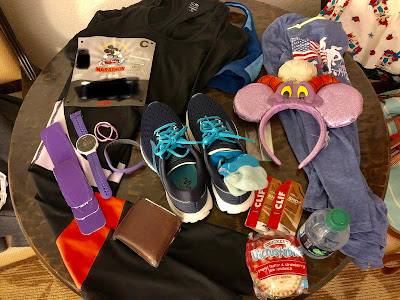 Around 6:30pm I headed down to the Palace Libary off the lobby, which is a sort of cozy community space and I loooove it. There's even a fire going 24/7! I caught the tail end of a drum circle in there before joining a small group for what the activity calendar promised would be a presentation on an African country from a Cast Member. 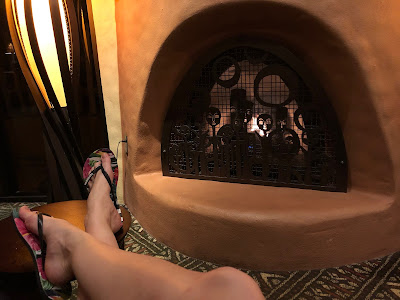 Our CM was named Elvis, which I can't give you a backstory on because "Is that your real name???" felt suspiciously like a microaggression. Anyway, Elvis (not that Elvis) spent about 40 minutes teaching us about Zimbabwe, which I am happy to report has cracked down hard on trophy hunting. Hooray! :D

After that I walked over to The Mara for dinner, where I was sad to see they didn't have my favorite pre-race meal. I settled for a flatbread, which I brought back to the room to eat while watching more dumb TV. 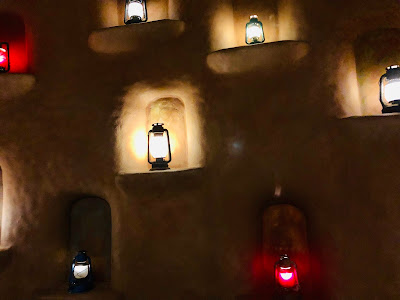 Then it was time to attempt to sleep but not actually sleep because I will never not be nervous about waking up on time. That is my gift and my curse.

Up next: The marathon! (Assuming I got up in time.)

Don't forget, you can follow FRoA on Twitter @fairestrunofall. If you have any questions or thoughts, leave a comment or email fairestrunofall@gmail.com. See ya real soon!
Posted by Jenn at 8:05 AM