In Which Jenn Puts Together A Universal Wardrobe

So you know how I make you look at my planned outfits every time I go on a WDW trip because I'm a Disney dandy? An investigation has yielded that I can do it for a Universal Studios trip too. And so I shall!

I know what you're thinking: you own Universal-themed clothing? Well, as it turns out, I own juuuust enough for this trip. Behold! 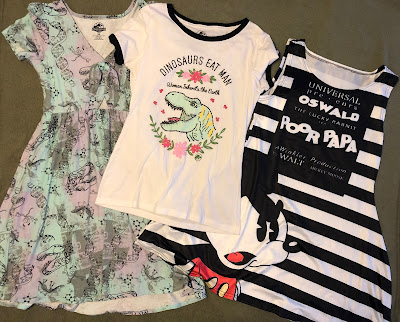 I know, I know, it's cheating to double up on Jurassic Park. But, um, Jurassic Park is awesome, so. I mean, the original is. The Jurassic World movies so far have been the original plot more or less only worse, but Jeff Goldblum IS in the next one so I guess things are looking up?

Anyway. The woman-inherits-the-earth t-shirt was a gift for my bridesmaids (because I got married in a museum amongst dinosaurs!). They were BOGO free and I had an uneven number so I added an extra for me. And it's paying off handsomely.

The JP dress came during that same purchase. Who doesn't love Mr. DNA? The only thing that would make this better is if B.D. Wong's face were part of the pattern, but I suppose one can't have everything.

And finally... TWIST! Yes, that's Mickey Mouse on that dress... but the text advertises an Oswald the Lucky Rabbit cartoon. Presented by - you guessed  it - UNIVERSAL STUDIOS! Take that, punks!

After all, you can take the girl out of Disney, but you can't take the Disney out of the girl.

Unfortunately none of these pieces are available for purchase anymore, but I got the JP stuff at Hot Topic and the Oswald dress from Wish if you want to dig around there.

Don't forget, you can follow FRoA on Twitter @fairestrunofall. If you have any questions, leave a comment or email fairestrunofall@gmail.com. See ya real soon!
Posted by Jenn at 8:28 AM