The Most Universal Trip Report Of All: Halloween Horror Nights

Detailing our quick weekend jaunt to Universal Studios Florida. Read all posts in this report here. 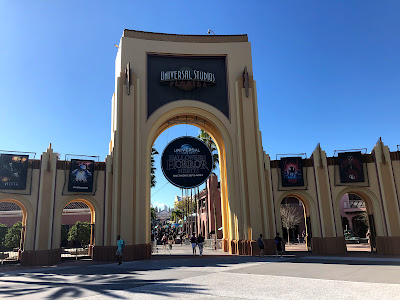 Please accept this, the most apropos Halloween post I could hope to offer.

After our early afternoon break in the hotel, we walked back to Universal Studios Florida. Incidentally, I should say that I would totally recommend the DoubleTree at the Entrance to Universal Studios if that's the theme park complex you're focusing on for the trip. I freakin' loved being able to walk from the hotel to the resort, plus there was a Starbuck's on property that was never busy and a convenient gift shop as well.

Where was I? Oh, yes, back to USF for Halloween Horror Nights. We made our way back to CityWalk, where a nice security guard gave his seal of approval for my Jurrasic Park shirt. On our way into the Studios, Pat bought us beers, which we sipped in a leisurely way as we traveled. I suppose that's the one thing Universal's layout can offer that Disney's cannot... 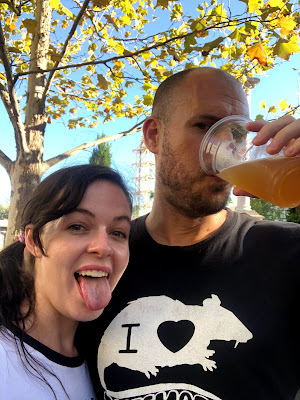 We entered the park about an before official close, leaving us time for one ride. Race Through New York with Jimmy Fallon was nearby and boasting basically no wait, so we headed inside. I can't really offer any commentary on the virtual queue system they have set up there as there was basically no wait. However, I have a LOT of thoughts on the ride itself, most of which can be boiled down into a single acronym: WTF?

It is a profoundly weird piece of theme park ephemera, turning a standard motion simulator experience into... into... is this what tripping on acid is like? I mean, I was already on board when that one Roots dude rapped the safety spiel, but the main ride is something else entirely. WHY does Jimmy Kimmel have a glorified go-kart? HOW do we somehow get little farther than Times Square? WHO are Sara and Gary? WHY do we leave eponymous NYC halfway through to take a roller coaster ride on the moon? WHAT EVEN IS THIS???

If you can't tell, I consider it an absurdist masterpiece and I am deeply in love with the entire thing. But probably not for the reasons the creators would've expected.

Anyway. By the time we finished tripping our asses off with Jimmy, the park was shutting down to day guests. Since we had tickets for Halloween Horror Nights, we were allowed to stay in the park during the transition in Stay 'n Scream holding tanks. We chose the one closest to the Ghostbusters house, since that was our primary goal. 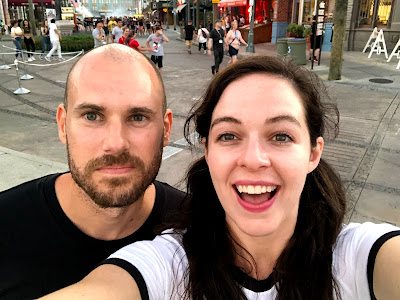 By my estimate, about 15 minutes before official go time, our Ghostbusters line began moving, and we were entering the house and 10 minutes later. Strangely enough, I wasn't nervous in the slightest. Maybe it was the beers Pat bought me while we were waiting in line. Maybe it was the complete lack of facade; basically you were outside a warehouse, and then you went inside and bam, the library from the opening scene. Whatever the reason, I went through the whole thing with my eyes open and had fun and everything!

Mind you, as has been noted in reviews, the Ghostbusters house isn't really trying very hard to scare anybody. It's more of a medium to tell the story of the movie. You go from the library to the firehouse to Dana's apartment to there is no Zuul to Gozer to Stay Puft with little more than the occasional terror dog leaping at you from a wall as any kind of scare.

I was absolutely fine with that, but I do think the whole thing felt rushed. I think they might have been better served putting together a standalone plot set in the Ghostbusters universe so they didn't feel like they had to hit Every Original Plot Point, but what the hell do I know.

Me? I don't know much. But Pat knows EVERYTHING about Ghostbusters. And, alas, he was somewhat let down by the experience. He too felt that not only the house itself was rushed, but that we, the people of the line, were rushed going through it. He wanted more interaction with the cast than was available. In fact, over the course of the evening I asked him a couple times if he wanted to go again, and he said no.

So that was not the rip-roaring success that I would've hoped. But there was one more point of light to hit: the event gift shop. While none of the merchandise was inspiring enough to purchase, there were tons of great set pieces decorating the store. 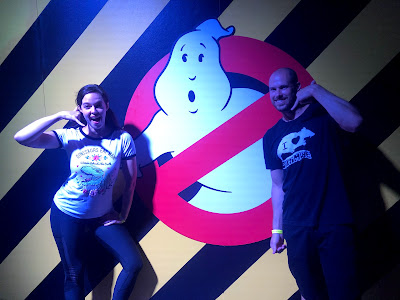 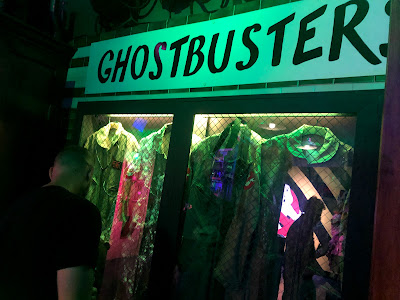 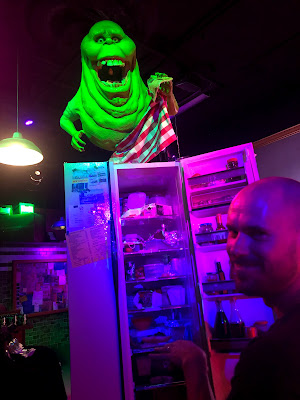 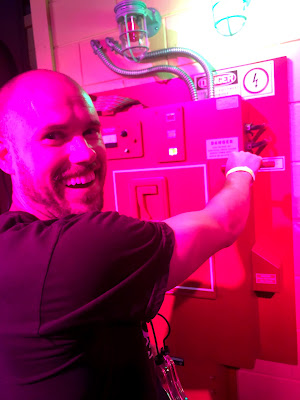 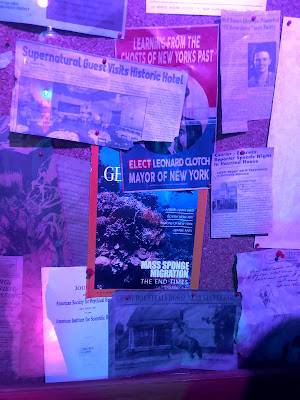 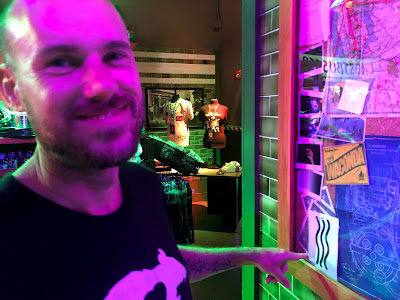 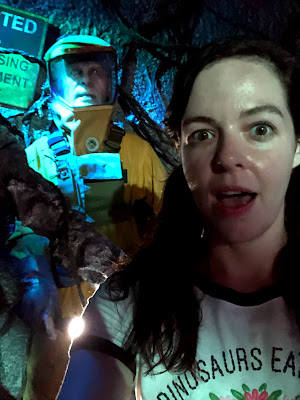 Since it was nearby, I dragged Pat through another round of my beloved Revenge of the Mummy before we grabbed a drink some bad pizza and did an exploratory lap of the lake.

The scare zones were still warming up for the most part (indeed, the Zombieland area never really seemed to get warm...), but Rob Zombie's Hellbilly Deluxe was going full force. Here are thrice the number photos of me in the Dragula car than you'd ever want because I love the robot man and can't choose from among his amazing poses: 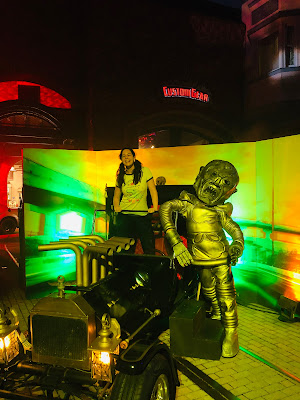 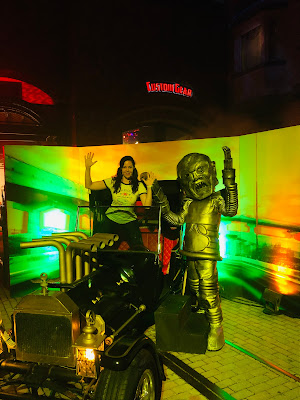 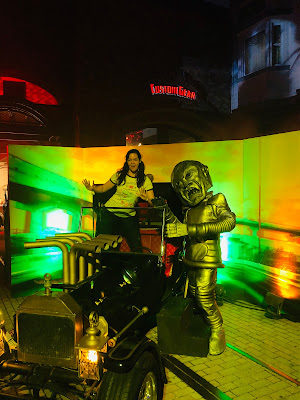 Next up we went through the new Fast & Furious ride, which was pretty much EXACTLY the same as the Kong Ride only with different decoration/video. Points for this iteration for Vin Diesel hanging from a helicopter, I guess?

After that we headed over to Rip Ride Rockit, our secret song codes memorized. But we couldn't get the secret menu to come up! On the way out I asked a cast member if the secret menu was even still a thing - and he offered us a second ride to try again. Alas, we still couldn't get it to work, but it was super nice of the SM to give us the second shot.

From there we headed into Diagon Alley, which as it turned out was still fully open. The Gringott's line was a little long, so we hopped into Florean Fortescue's for ice cream instead. I freaking LOVE the clotted cream ice cream here, but apparently I'm the only one - Pat did NOT like the lick I gave him, and I even overheard a woman ahead of me in line ask for a description and then reject it. What, you don't like sweet-n-sour milk? >D 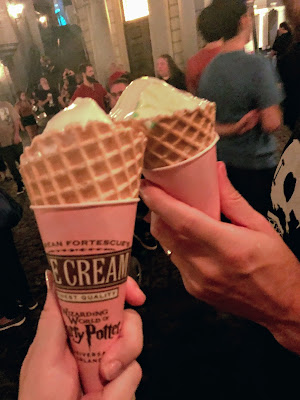 We swooped around the lake and took a spin on the Simpsons ride, which is no Back to the Future but fun enough. Then we circled back to Gringott's for one last go-round, plus a late-night viewing of the fire-breathing dragon. 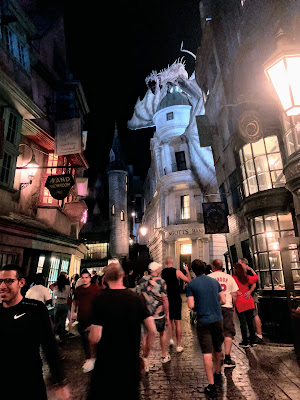 And then we took a final spin on Rip Ride Rockit... and Pat got the secret menu to work! He says the secret is a light touch.

By then it was around midnight, but even with 2 more hours of the event left, Pat put in the vote to head home. The lines were still pretty long, especially for the houses. I was too tired to resist, so I followed him out. We walked back to our hotel, got up the next morning, and flew home. Boo. Boo! ('Cause I'm a ghost, see?)

I used to be absolutely terrified of haunted houses and scary movies, but now I'm kinda into them. Unfortunately for me, Pat wasn't really jazzed for the houses because he's NOT scared of such things; he just wanted to ride rides. And I get that. But I think I'd like a do-over with someone who's willing to be just brave enough but not TOO brave for the haunts. Anyone? Anyone? :D

So that was our Universal trip. Stay tuned for food and drink roundups, plus the diary of a Kong completist. See ya around the blog!

Don't forget, you can follow FRoA on Twitter @fairestrunofall. If you have any questions, leave a comment or email fairestrunofall@gmail.com. See ya real soon!
Posted by Jenn at 8:13 AM