In Which Elizabeth Goes To Kings Dominion

Occasionally, my friends will run a race or go to theme park without me and then make the grave mistake of telling me about it, at which point I strongarm them into writing me up a guest post. So let's welcome back the indomitable Elizabeth, who is here to tell you all about the Halloween haunts of Kings Dominion in Virginia! 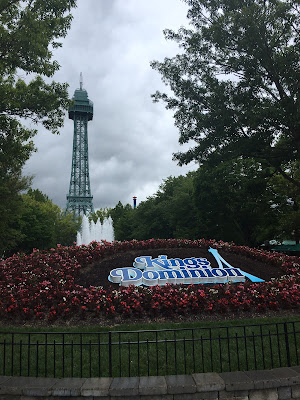 I went to Kings Dominion’s Halloween Haunt for the first time this year, and it did not disappoint!  There were two main components: scare zones and mazes (i.e. haunted houses). The scare zones were designated, themed areas where employees (I keep wanting to call them “cast members” because of Disney…) will jump out and scare you, or possibly creepily follow you through the entire area until you leave. I’m not sure why the mazes are called that, because they are really just twisty paths through the haunted houses, and you’d have to try *very* hard to get lost. One of my friends refused to go in the first one we encountered because she was convinced she’d be trapped inside, and we had to reassure her afterwards that there were not, in fact, any dead ends.

The scare zones were interesting to walk through during the day, because it looked like theming that wasn’t fully thought out: “Oh, some random watch towers? That’s...atmospheric, I guess.” But then once it was dark and the actors were in place it suddenly made sense that this was supposed to be a prison yard full of violent escaped convicts. The prison yard and the carnival themed scare zones were probably the creepiest, and one of the zones featured actors on roller blades that had some kind of sparking device on them that meant they would charge at you *while spraying sparks* and it was VERY startling the first time this happened to me. The actors in the french revolution-themed scare zone didn’t seem to be working that hard at actually scaring us--they had large fans that would snap very loudly, but the actors would just sort of snap them in a desultory manner without even trying to sneak up on you first.

Speaking of the French revolution, the main entertainment of the night was the big musical numbers that featured Marie Antoinette being beheaded, followed by song and dance numbers from contemporary musicals, like The Greatest Showman (why? I don’t know). The beheading scene was pretty entertaining but we left shortly after that.

The first maze we went through was “No Vacancy: Condemned”, which I chose because it was touted as being a “mystery” that you would presumably solve. This was also the only maze we encountered where everyone got a flashlight. I was disappointed that there was not an actual mystery--the plot of the house was that the woman who ran this hotel had a bad habit of killing the guests, which you found out when the “ghosts” jumped out and screamed at you about it. The flashlight element was pretty effective, as they kept the lights down and you were in control of what you could see in the rooms.

In general, the mazes were really well done and my main complaint was that I didn’t have enough time to appreciate all of the excellent set design and costumes because I needed to keep moving through the space to avoid holding up the line, as well as being constantly distracted by the actors. We didn’t go through every single one, but I’d say “Blackout” was the most disappointing haunted house. It’s called that because the entire thing is in complete darkness--which IS creepy, except what happened was that all the guests formed a giant conga line, so no one was bumping into walls. I’m pretty sure this was an excuse for the designers to cheap out on set design as well, because aside from a few times we walked through fishing line hanging from the ceiling, I’m pretty sure it was just a plain hallway with some actors in it. The actors would get right up in your ear to say creepy stuff, which did make me jump a couple of times, but overall I was not impressed.

IMO, the best-designed mazes were No Vacancy, Blood on the Bayou, and Lockdown.Cornstalkers was also good and had the advantage of being the only maze that was outdoors, as far as I know.

Thank you, Elizabeth! Next time I'll have to tag along. :D

Don't forget, you can follow FRoA on Twitter @fairestrunofall. If you have any questions, leave a comment or email fairestrunofall@gmail.com. See ya real soon!
Posted by Jenn at 8:24 AM