In Which Jenn's Disney Wardrobe Will Work Out Fine

I was all worked up about my Disney wardrobe for my upcoming trip - and it turns out the weather is going to be pretty Florida-y after all!

Despite the extremely variable climate of Florida in January, it looks like it's going to be in the high 70s and low 80s while I'm there (which could be interesting for my race costumes, but we'll get to that tomorrow...). I have knee socks and extra layers, but I probably won't need them. 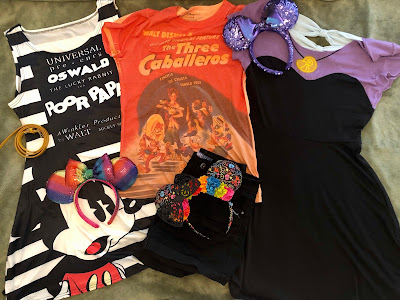 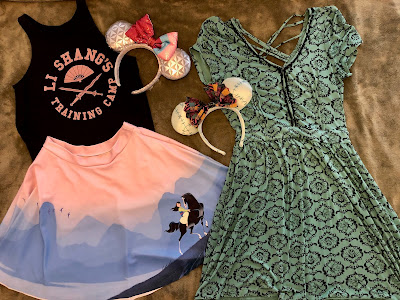 - I'm excited to debut my Oswald dress! (I didn't wind up wearing at at Universal because it was pouring down rain). I got it from Wish.com but I don't think it's available anymore. Ditto my rainbow ears - Disney now makes a different version.
- My Three Caballeros t-shirt is very old! I plan to pair it with some high-waisted black shorts and my Dia de Muertos ears - which Disney only seems to release around the holiday, in various forms.
- I freakin' love my Ursula cosplay dress from my constant in Disney shopping, Hot Topic, paired with Purple Potion ears, which are still available in the parks but I don't see online unfortunately.
- My Li Shang's Training Camp tank was from Box Lunch. The Mulan skirt is from Thredup; I'm afraid I don't know the provenance. I believe the Spaceship Earth ears are still available in the parks but I don't see them on the site.
- My Jack Skellington & Zero dress is also from Hot Topic. Once again, Disney has replaced the Sally ears with a new version. They sure have been shaking things up on the ear front lately!

As always, if you see me out in the parks, say hi! I promise I'm only a little bit awkward. >D

Don't forget, you can follow FRoA on Twitter @fairestrunofall. If you have any questions, leave a comment or email fairestrunofall@gmail.com. See ya real soon!
Posted by Jenn at 10:35 AM