In Which Jenn's Race Costumes Are Ready - With A Twist!

Ruh roh, guys - I guessed wrong, a little. Looks like this marathon weekend is gonna be a pretty warm one. So much for all my long pants and gloves and heat packs!

Doesn't matter too much, though, as my race weekend wardrobe has acquired a ringer. Behold: 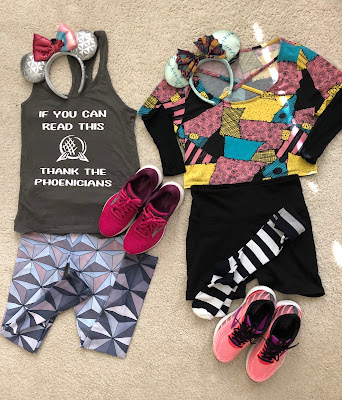 - For the half marathon, I'm running as Spaceship Earth! I've shared this outfit before, with an important substitution - I originally included my black running pants with the colored stripes, as they felt rather Epcot-y to me. Well, check those SE leggings - Pat got them for me for Christmas! There's a man who knows what I like.

They're super soft and comfy, but they're midrise and not really designed for running; I was skeptical they would stay up during runs. But I tested them on some training runs and lo and behold, they work! They're long but I plan to run the half extra easy, and I think in the early morning and with such light fabric I'll be okay. Anyway, how can I resist such a perfectly synergistic offering? You can get the tank here and the leggings here. I don't see the ears on the Shop Disney site but I think they're still in the parks.

- My Sally costume for the marathon is the bigger risk as it is - I've never run a race in shorts! But I didn't bring any capris and I freaking LOVE these shorts so I think it'll be fine; just some extra Vaseline for safety. The compression socks will be a game day decision, but Sally has striped socks so I had to get them, obviously. And the arm warmers are just throwaways for the morning (tune in the next month or so for super easy and cheap throways from tights!).

I got the Sally cosplay top from Thredup, but I betcha it was originally from Hot Topic. The Sally ears are no longer available but Disney has a new version. Shorts are from Old Navy and socks are from Amazon.

Pat did ask me "Why did you bring TWO pairs of sneakers?" but nobody's perfect.

See you at the start line(s)!

Don't forget, you can follow FRoA on Twitter @fairestrunofall. If you have any questions, leave a comment or email fairestrunofall@gmail.com. See ya real soon!
Posted by Jenn at 8:32 AM