As is my wont, I set an aggressive schedule for day 2 - there were Extra Magic Hours to be had at the Magic Kingdom and I intended to have them. I hopped out of bed to my 6am alarm, showered, dressed, roused Erika, and off we went to the park (although I must confess I was a bit miffed we had to take a bus to get there. Skyliners to everything, says I!)

True to my design, we were through security and at the gates early, and chose to kill some time with a Photopass photographer hanging out in front of the train station.

When the masses were finally permitted to pass through the tunnels and onto Main Street, we took up position outside Fantasyland, and upon park opening followed the crowds to the Seven Dwarfs Mine Train. Thanks to our early arrival, we were able to board in train in little more than 20 minutes or so.

After that I let Erika pick some rides, and we took in The Little Mermaid, Winnie the Pooh, and it's a small world with minimal wait before running off in search of breakfast. We were halfway to Sleepy Hollow for waffle sandwiches when I realized we had early lunch reservations so we backtracked and got something light at Cheshire Cafe instead (more on that later).


Post-breakfast, we cashed in on our Peter Pan's Flight FP+, and then headed over Tomorrowland in anticipation of our Space Mountain return time. Unfortunately, during our spin on my beloved Peoplemover, we saw the lights were up inside the coaster, indicating that is was currently down.

Instead, I have Erika a choice of Carousel of Progress of Monsters Inc. Laugh Floor, and she chose the latter. I was fine with this as I hadn't done it in, oh, five years? More? And I remembered it as being up to and including hilarious provided you got a good audience cast. Our audience cast this time proved to be medium-funny, but by the time we exited the theater Space Mountain was back up so it all worked out.

So we rode that, and then we set off for Adventureland. Before we could make it, however, we were flagged down by a nice lady performing a guest survey. Never one to shy away from voicing my opinions, I told her all about myself and faithfully promised to fill out the email survey I would be receiving in a couple days. (And I did. See, I'm trustworthy!)

This done, we proceeded to our original destination, Skipper Canteen, which I will be reviewing in a later post but suffice it to say here that I enjoyed. After that it was a quick spin on the Haunted Mansion with our final FastPass, followed by a trip on the monorail over to Epcot. I picked up a Soarin' FP+ on the way.


We were briefly distracted by the Jammitors before going on our way, our way in this case being to the Mexico pavilion for a trip on Gran Fiesta Tour where no Cast Members noticed my Three Caballeros shirt. Boo. 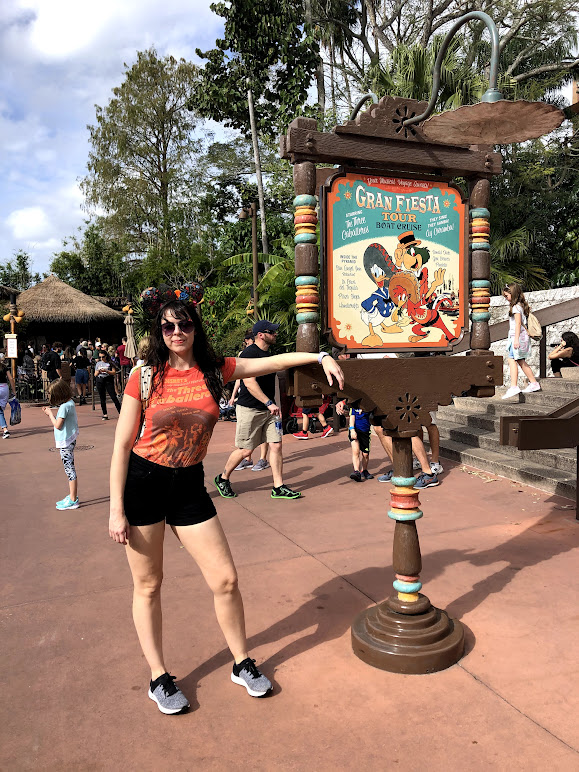 But then we got pictures with Caballero Donald and he totally noticed and loved it and hugged me a blew me a kiss as I left! Yay! 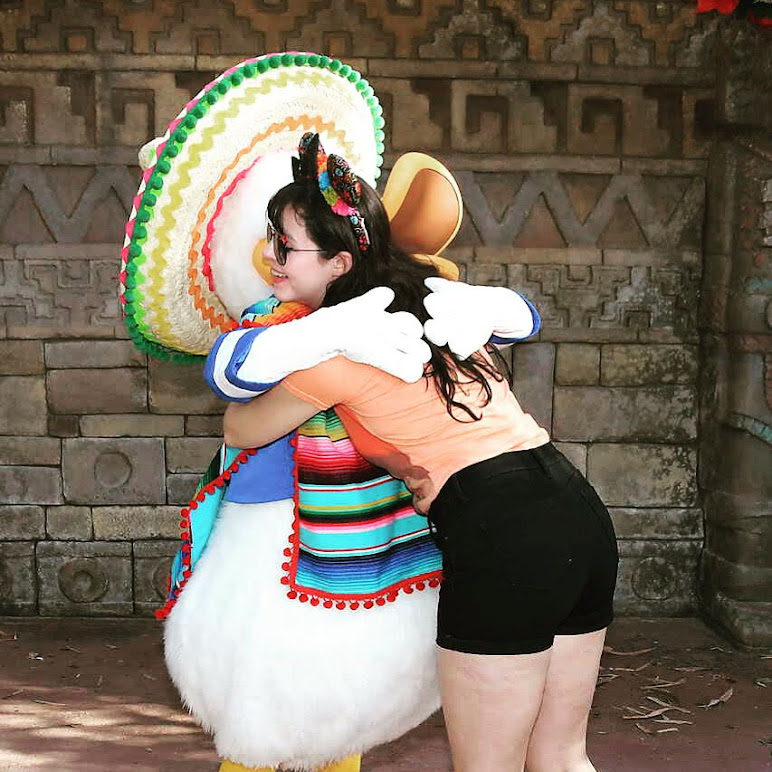 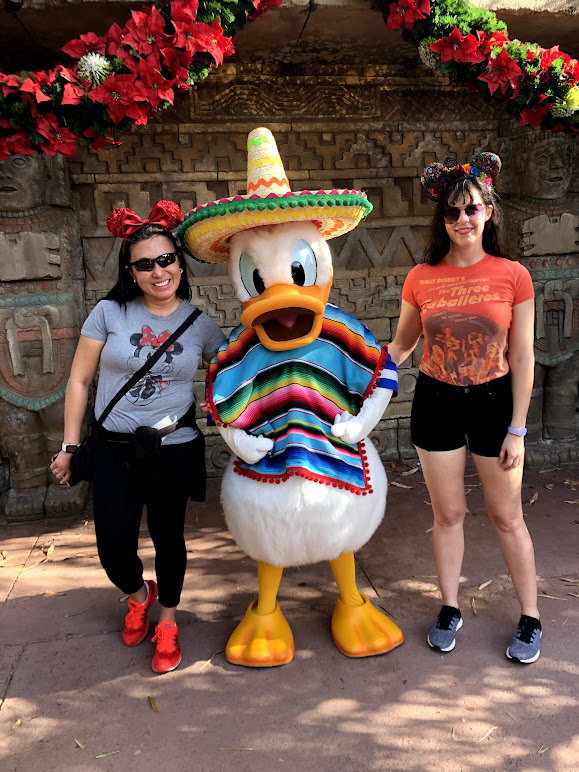 I also played with the make-your-own-skeleton-self thing at the entrance, but I think it's supposed to be motion sensitive and it wasn't and all my photos are blank stares??? 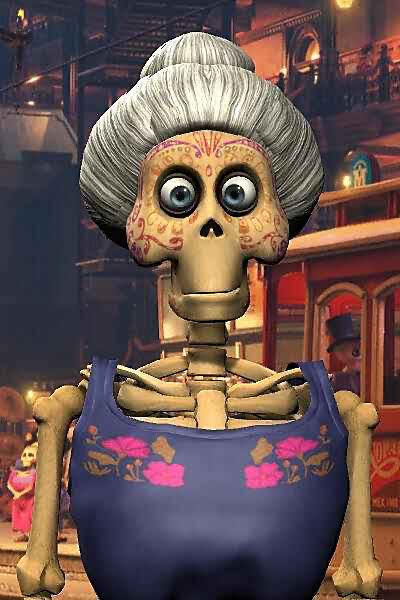 Always a big fan of backtracking, I led us back to The Land for a ride on Living with the Land, after which we stopped to chill and grab a drink in the food court. Finally it was time for our Soarin' FP+. Did I mention I once saw a guy in World Showcase wearing a "Make the Eiffel Tower Straight Again" t-shirt? I thought that was pretty funny.

Some obsessive refreshing at this point yielded a Test Track FP+, and with this on our horizon we decided to take a stroll around World Showcase. We stopped for the taiko drummers in Japan, dipped into Mitsukoshi, and got Erika a bubble tea in China.

On our way out of Canada we wandered by Journey Into Your Imagination and decided to take a spin; Erika listened very patiently while I explained how Figment is the #1 greatest Disney character ever invented and this ride used to be way, way better. Grateful for her support, I promised to tell her when to hold her nose.

The post-show area now has character meet-and-greets, so we took a pic with Joy and then Erika got a picture with Wreck-It Ralph and Vanellope while I took the opportunity to charge my phone with an outlet I spotted. 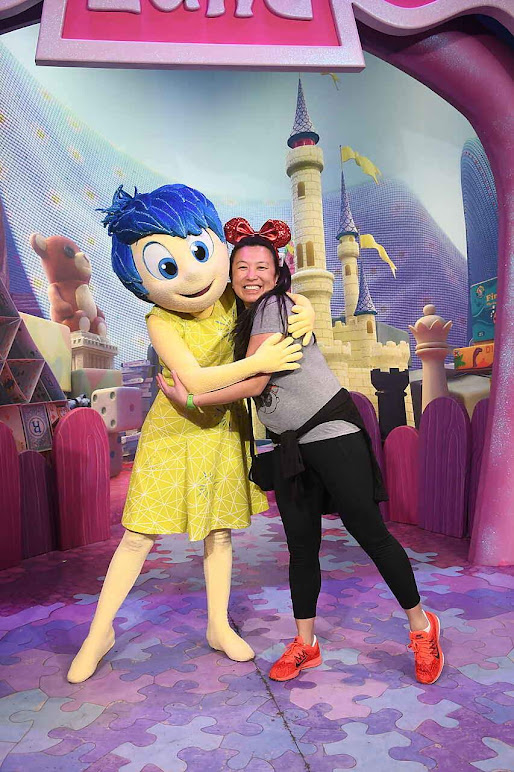 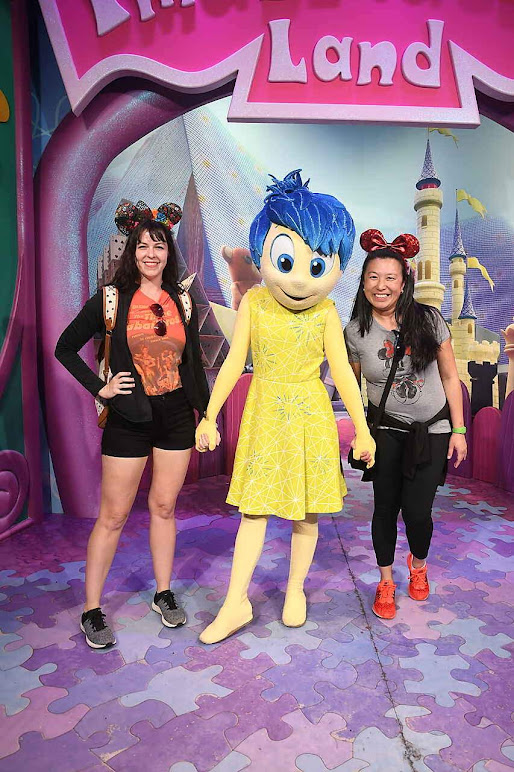 After completing our Test Track ride featuring the best car ever, we took the monorail back to the Magic Kingdom with the sole intention of seeing the fireworks. But first we had some time to kill so we headed into the Emporium so that Erika could find presents for her kids. Man, if I ever win the lottery I am gonna TEAR IT UP in there... 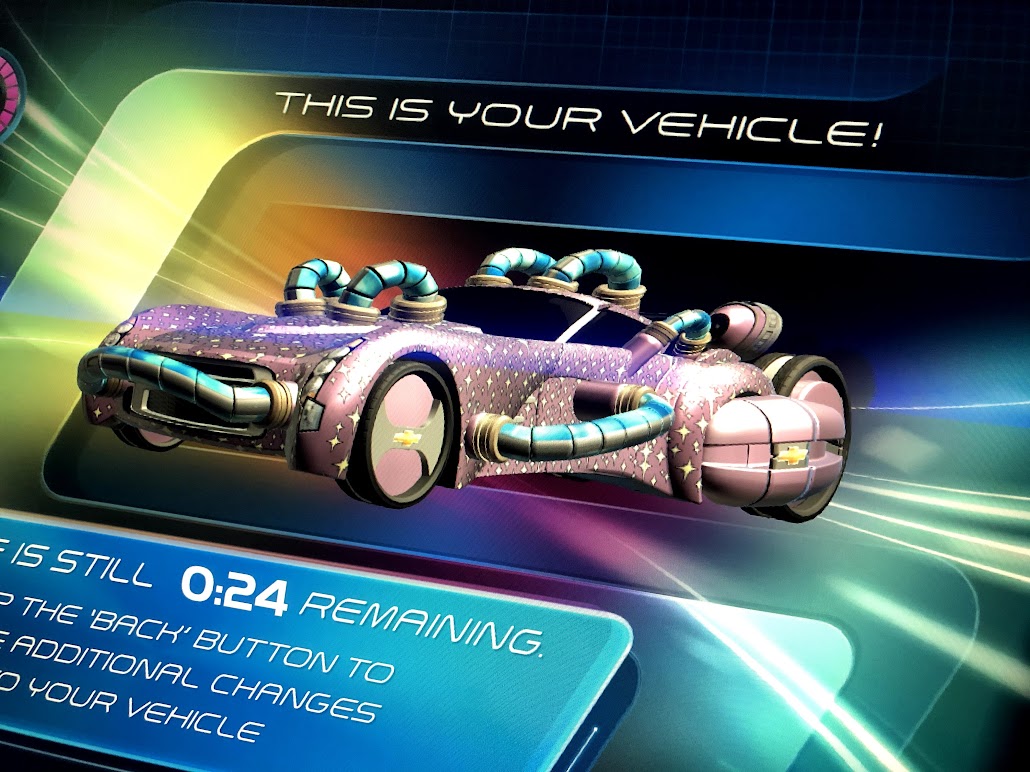 We took up positions at the end of Main Street near the entrance, compromising a bit on view in exchange for hopefully beating the crowds to the buses. And then Happily Ever After started, and it was magnificent as always! I barely even noticed the fireworks, my attention almost entirely focused on the castle projections (I've watched this sucker from the California Grill more often than I haven't). I could do with fewer kids on peoples' shoulders, though.

Our plan was a success, and we were able to pick up a bus to Pop without difficulty. We snagged a quick dinner at the Pop food court, then headed back to our room to relax and prep for the morning's race. 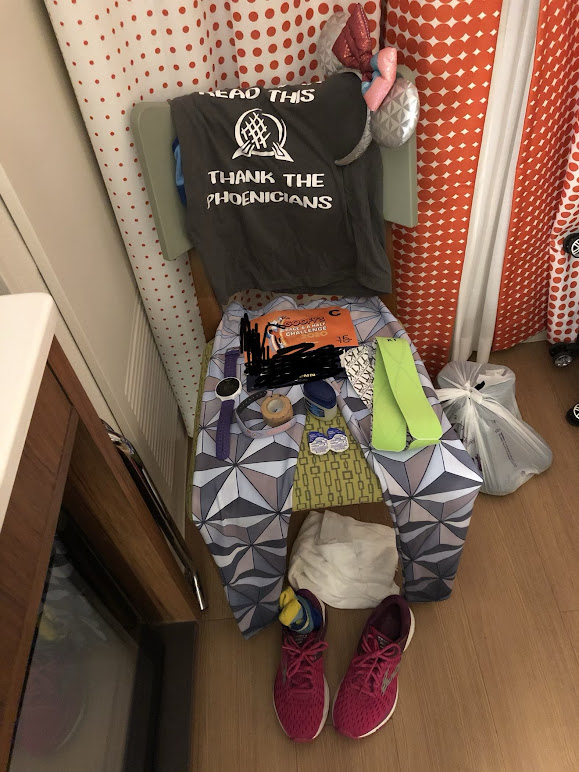 Next up: the half marathon!

Don't forget, you can follow FRoA on Twitter @fairestrunofall. If you have any questions, leave a comment or email fairestrunofall@gmail.com. See ya real soon!
Posted by Jenn at 7:12 AM