In Which Jenn Backtracks Wildly For runDisney 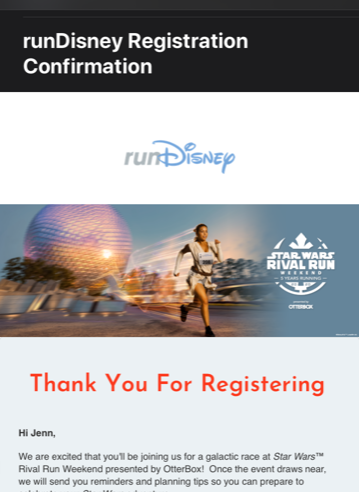 Guys, it's happening! I wasn't sure it really would, but it's officially happening!

I signed up for runDisney's Star Wars Rival Run Half Marathon and Pat and I are going to WDW for a WEEK!!!

I know what you, a longtime reader with one hell of an elephantine memory, are thinking: "Jenn, I thought you said the Star Wars half wasn't really right for you?"

Well, I did say that. But I said it in the context of a person approaching it as a runDisney race, meant to be run purely for entertainment, characters, etc. But this time around I have loftier and, dare I even say it, speed-based goals. I'll elaborate closer to the race once I've got the training largely behind me, but might *I* have lightspeed hidden inside me...? And anyway several people we know are also going so that could be fun.

But you've already got a comeback, I know it. "Jenn," you say, "didn't you ALSO say that you are neither jazzed about moderate resorts nor Caribbean Beach in particular?"

Well, I did say that. But that was before the advent of the Skyliner, the most beautiful, the most wonderful, the most magnificent form of Disney transportation ever on offer (and yes, I myself include the monorail in this - FIGHT ME!). Caribbean Beach, being the Skyliner hub, is going to get me to the Studios and Epcot in a different kind of lightspeed! And anyway Pop was booked up and the Riviera is too expensive.

Only one week until I can make FastPass reservations! But no need to worry about ADRs - I reserved my post-half marathon spot at Oga's Cantina weeks ago. You know, in case. ;D

Don't forget, you can follow FRoA on Twitter @fairestrunofall. It would thrill me extremely if you would leave a comment with any questions or thoughts. See ya real soon!
Posted by Jenn at 7:12 AM