The Fairest Trip Report Of All: Oga's Cantina Review 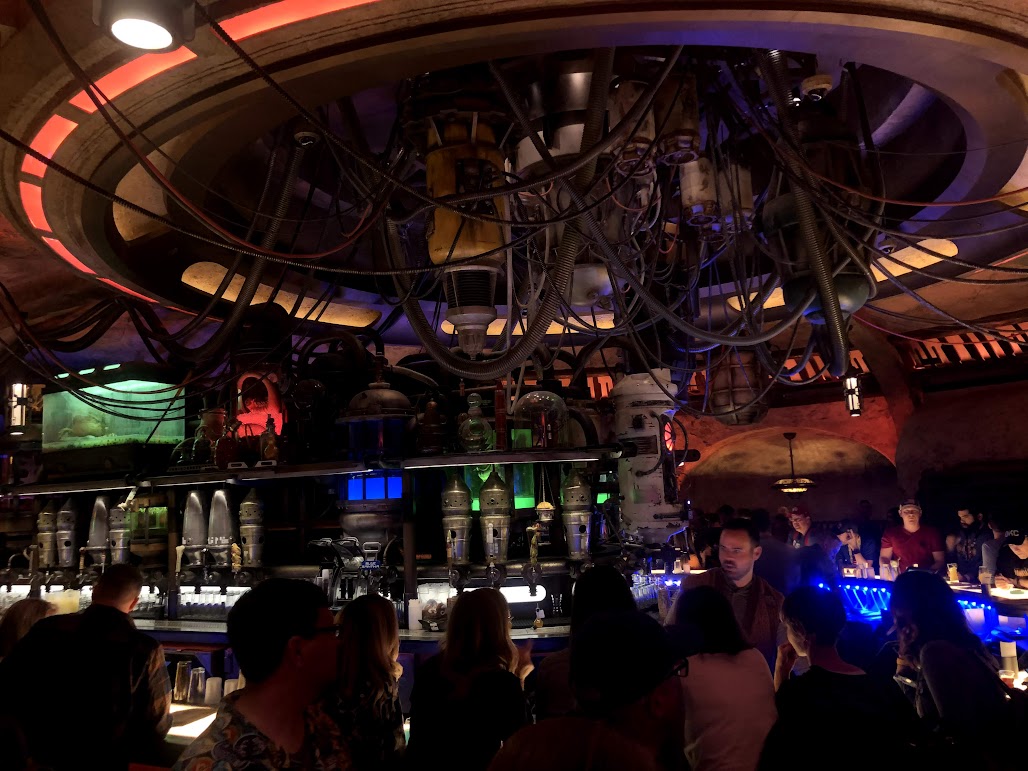 As I have mentioned on several occasions, I 1000% prefer to Trek over Wars with my Stars. But I gotta say, even as an inveterate follower of Captains Picard and Janeway,* I freakin' loved Oga's Cantina.

The very popular flagship bar in Galaxy's Edge, Oga's Cantina cultivates an ambiance. The bartenders, while not playing characters per se, definitely have an air of anarchy about them (think Whispering Canyon Cafe, but make it space opera). The set decorations and, of course, DJ Rex all combine to create a strong sense of place, even if you're not previously familiar with that place. 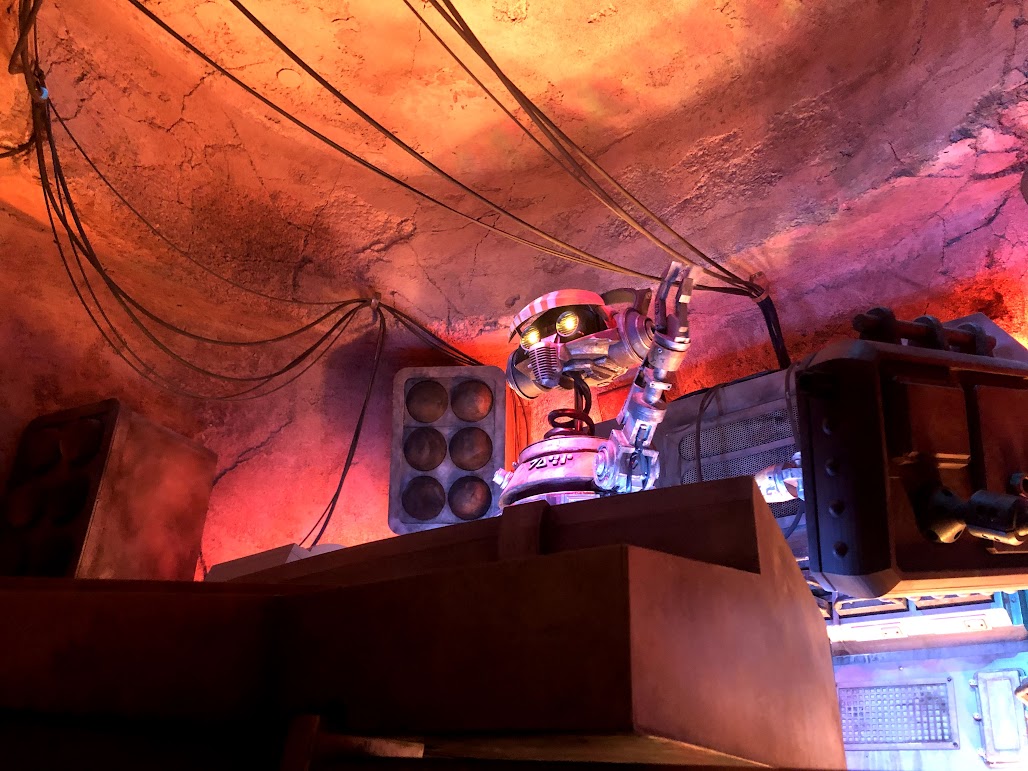 The drinks are not cheap, but they are delicious. It being early on in our trip and have 39.3 miles to run ahead of us, I had initially planned to get the non-alcoholic blue milk and cookie and call it a day, but I wound up getting totally swept up in the spirit of the thing and got the full two rounds Oga's rules allot. (Although after our two our server offered us a third, which we declined but it seems the two-drink maximum isn't hard and fast. Or it's the anarchy?) 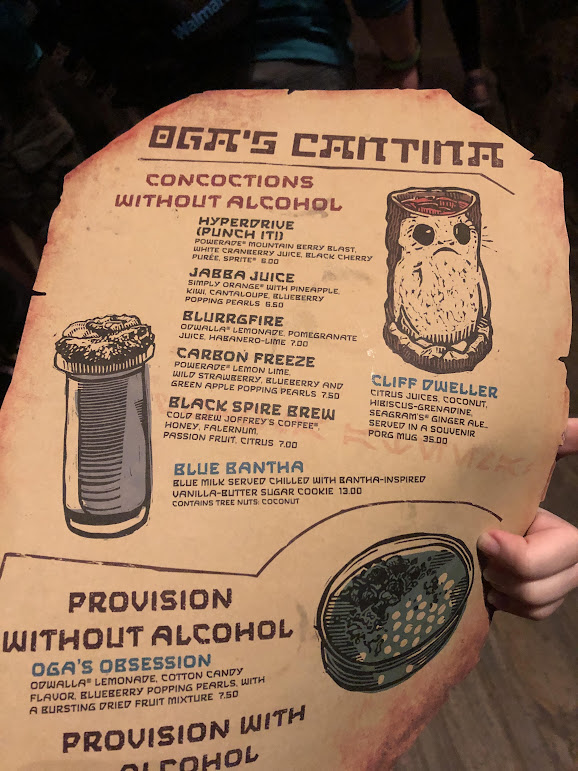 Intrigued by a "botanical grapefruit vodka," I started with the Jedi Mind Trick, which also includes an assortment of juices plus my beloved falernum (or, as Pat and I called it, flrnm). This was pleasantly fruity but just not as interesting as I had hoped from something labeling itself botanical. 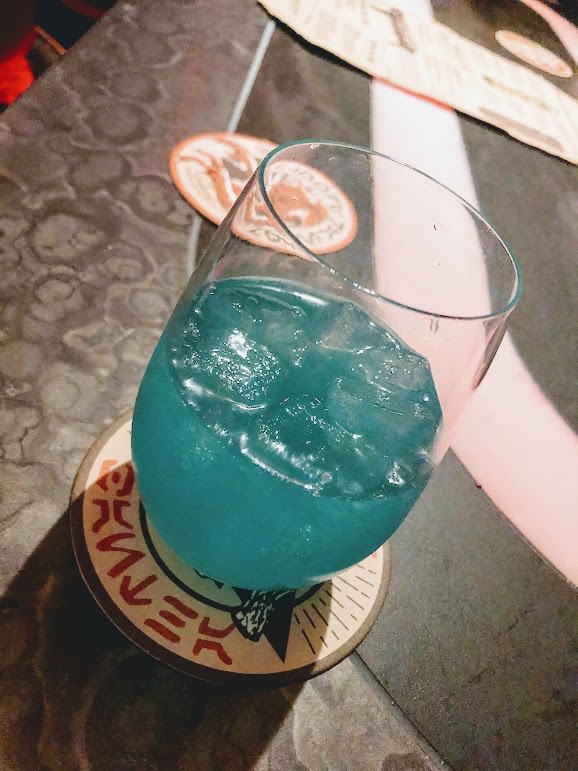 Erika's first drunk was the Punch It! Powerade concoction she deemed entirely too sweet and fully cloying to the point that she was ready for something featuring alcohol. Do skip.

After seeing The Outer Rim across the table, I knew I had to get that next. It's essentially a margarita but it comes with an exotic fruit puree that is foam by any other name, plus a copious black salt rim. It was kinda like having some slurpy on top of your margarita, which I was into. 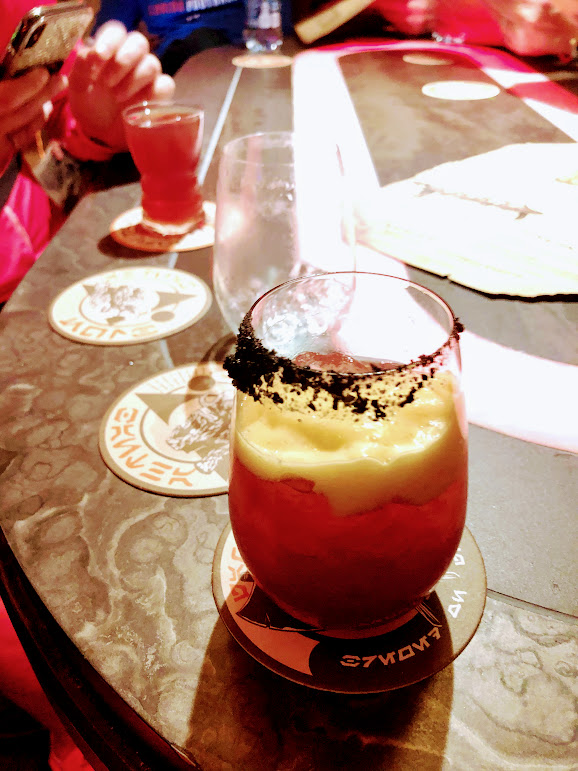 In the back there you can see Erika's Jet Juice, which both the server and a Twitter friend warned us was deceptively strong for its size. And indeed it was! Erika let me try it, and while I'm not generally a huge fan of bourbon cocktails this one was really good. I mean, I'll sip a whiskey on the rocks, but it usually tastes weird in a mix to me. This one was delightfully balanced, with the chili liqueur cutting the alcohol taste beautifully.

Overall: totally worth it, already have another ADR for my next trip and it hasn't even been confirmed yet. >D Hooray for Oga's Cantina!

Don't forget, you can follow FRoA on Twitter @fairestrunofall. If you have any questions or thoughts, leave a comment or email fairestrunofall@gmail.com. See ya real soon!
Posted by Jenn at 7:28 AM