In Which Jenn Has A Rough Sketch Of A Race Schedule? 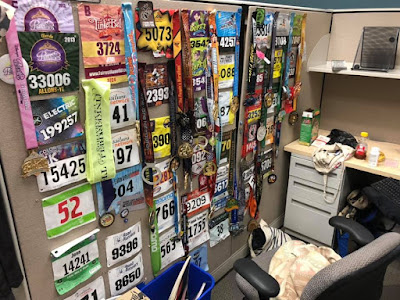 Kidding! Kidding. Hopefully they all happen. Certainly the virtual ones will.

I've never been a virtual race girl. Kudos if they're your jam, but I find the medal without the full experience of a race attached to be underwhelming. Still, the world being but it is in the age of COVID-19, I've adjusted my outlook a little.

For starters, the Rock 'n Roll Race Series has started a virtual race experience where everything is free! I mean, you can order medals to accompany your accomplishments if you like, but it's not required. They have little challenges during the week and a different virtual race distances on the weekends. There's a point system with prizes attached, but they aren't very good; likewise, there are randomized prizes to be won when completing a challenge, but statistically the winner won't be either of us. Still, it's a fun little runner's diversion - and did I mention it's free?

In addition, my former hometown race the Parks Half Marathon has been cancelled for 2020. :( The good news is they're now offering a virtual version, so I can participate even from 1,000s of miles away - AND it's only $25 WITH a premium! I don't know what that premium is, exactly, but in the past they've handed out fleece hats, ballcaps, and ear warmers. If you'd like to try a virtual race that doesn't just duke you your millionth cheap t-shirt, give this one a shot.

Now for some actual, geographically localized running, assuming we are so lucky. Since my March marathon in Wilmington, NC was cancelled and subsequently my trip to visit my parents, I'm taking a stab at an event there in November instead - the Showboat Challenge at the Battleship Half Marathon. I'll be doing the half plus the 5K the day before. KNOCK ON WOOD KNOCK ON WOOD KNOCK ON WOOD that it can happen!

I was strongly considering taking another stab at the Baltimore Marathon, which is October 17 this year. I'm sitting on it a bit before registering, though - in addition to the whole looming spectre of potential cancellation, we'd potentially be staying with someone who's immunocompromised, so keeping a weather eye on the virus sitch is imperative.

There's a Divas Half Marathon in San Juan on October 25. I'm not 100% on board with the whole "men as sex objects" angle, but I'd really like to run a local half so I might sign up anyway. Again, we'll see if it looks like it's happening, and how I'm feeling leading up to Battleship.

I also randomly stumbled upon a Santa Run 5K right by my apartment here in Puerto Rico last December - I had no idea it was happening and spent my 10 miler running past the course and sulking. Now that I'm in on the secret, I intend to sign up, assuming it happens again this year!

And that leads us into 2021, which I will of course begin with my beloved WDW Marathon. There's a kink in my plan, though - because of the virus, bib numbers were reduced, and all the races sold out super quick... before my race buddy could get her bib! Luckily she got a bib through a charity, but yikes!

(Incidentally, this has me what the kids would call "shooketh" - I've never seen the marathon by itself sell out like this. My race buddy was only like 90 minutes behind. Hell, I didn't sign up until October once! One time I waited until several hours after opening! What if I'd gotten cavalier and not registered during the AP window? Perish the thought!)

Obviously this is ALL pure speculation at this point, even for the races I'm legit signed up for. But ever the quixotic one, I hold out hope that we can start racing for real again by the end of the year. Clap if you believe in races!

Have you put together a race schedule for this year? Or to put it another way: are you also a quixotic one?

Don't forget, you can follow FRoA on Twitter @fairestrunofall. It would thrill me extremely if you would leave a comment with any questions or thoughts. See ya real soon!
Posted by Jenn at 8:00 AM 3 comments:

In Which Jenn Has A New runDisney Race Registration Strategy

I'm gonna cut right to the chase here: my new runDisney race strategy is that I'm registering for ALL OF THEM.

I took the Annual Passholder route last week to register for the WDW Marathon early, because it is my One True Race. 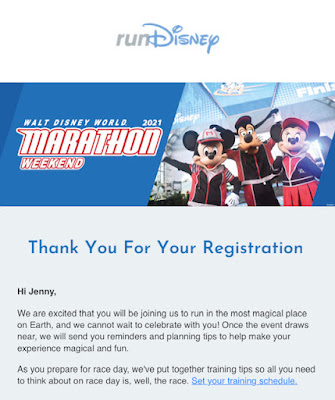 Luckily, the marathon is the least popular of the races/challenges of that weekend, so I had no trouble getting in, but every other race opportunity sold out quickly. I'm hearing COVID-19's got Disney putting a lower cap on the totals, so for all of you gunning for a registration tomorrow, I wish you good hunting.

More abnormally, I also plan to register for the Princess Half, and probably Rivals too. Heck, maybe even Wine & Dine; Pat accidentally broke one of my Food & Wine Festival wine glasses last week and I told him he owes me a trip to get new ones. ;P

I'm just worried that if another race weekend gets cancelled, by the time we find out the next available race will already be sold out. And I already felt that acute sting when I was unable to pivot from Rivals to Wine & Dine this year. (Assuming that one doesn't get cancelled too; fingers crossed for you guys!)

Race cancellations aren't fun for anyone - I certainly don't begrudge the person at the top who has to make the dreaded decision - but as long as I know I've got something on the horizon, I won't sink too heavily into the doldrums. I'll have to spread my budget across shorter, less ambitious trips and maybe skip a race the next year, but I can make it work. Who wants to split a hotel room with me? :D

Incidentally, I still think runDisney should respond to the void (ha!) left by Rivals by reinstating the Tower of Terror 10 Miler. Anyone? Anyone?

What's your runDisney strategy for the coming year?

In Which Jenn Tries Out... Rest Days??

Hey, remember that hip issue I was having last year? And I barely ran all December and showed up to the Goofy Challenges KT-Taped to high heavens but somehow escaped with no pain and thought I'd beaten the issue? WELL IT'S BACK.

So I'm taking a rest week. This is an uncomfortable time to take a rest week, as in the current social distancing climate my runs are some of my only real opportunities to be outside. But my hip was really bothering me, so no running for me all week.

And I came to a realization. After we moved to Puerto Rico last year my race scheduled screamed to a halt - we were just finding our footing, culturally, geographically, and especially financially. Races aren't much of a thing here and I didn't want to take out the time and money to fly to the mainland for races.

This year I did (/do, knock on wood) have a handful of races to look forward to, but my spring marathon was cancelled; I'm scarcely any better off than I was last year from a race perspective.

In 2018, with a steady stream of races in rotation, I would've had around 6 rest weeks.

This year, I took a week and a half off in January after the Goofy Challenge... and nothing since then. I DID recently knock out two practice halves and now here I am, with my hip injury back.

MAYBE, just MAYBE, I need to factor in rest weeks even when I DON'T have races.

And MAYBE, despite these very unfortunate circumstances where NO ONE gets to do a proper race, you should consider a rest week too. It may seem counterintuitive, considering the forced confinement of our quarantine predicament, but your body only knows the pavement it pounded. Now might be the time to give it a break, you know?

When was your last prolonged rest period?

Don't forget, you can follow FRoA on Twitter @fairestrunofall. It would thrill me extremely if you would leave a comment with any questions or thoughts. See ya real soon!
Posted by Jenn at 8:12 AM 2 comments: