In Which Jenn Runs The Virtual Parks Half Marathon

I've said this before, but just to reiterate: I'm not really a virtual race kinda gal. I only generally do them if a premium is REALLY good or if a race gets virtual-ized and it's the only option available if I want to recoup my investment.

However, when the Parks Half Marathon went virtual, I signed up even though I wasn't registered for the live version. I mean, it's one of my former favorite hometown races, it was only $25, and the premium WASN'T just another race tee! Score!

Unfortunately, when plotting out my training schedule that month, I accidentally placed my practice half a week earlier than the race window started. Oops! I had carefully planned that run, so I did it anyway, and considered just calling that my virtual Parks - I mean, did it really matter?

But I knew too that it would probably bother me just a dab even if it didn't anybody else, so I ran another practice half on literally the very last day of the designated race window. Under the wire FTW!

Of course, this being the MARYLAND Parks Half Marathon, I outfitted myself accordingly.

The run itself was actually pretty okay, too - not very fast by my normal standards but solid by Puerto Rico standards. Seriously, I was in Maryland for a bit last week and in the autumnal temperatures I was shaving legit minutes off my times. I hear heat training is good for you, so here's hoping that manifests in new personal records in future races!

Thus I earned my groovy medal and a nice heavy weight beanie: 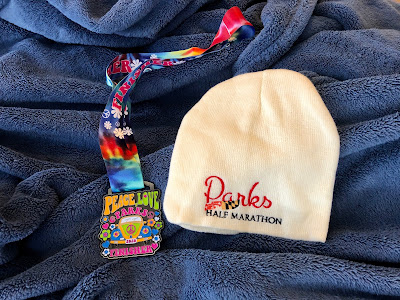 Borderline useless here in PR, but it's good to be prepared for other locales - 2017 WDW Marathon, anyone?

Are you a virtual race person?