In Which Jenn Finds A Cheaper KT Tape Alternative

I've been a pretty loyal KT Tape user over the years. I found Rock Tape to be pretty much the same but harder to get, and the CVS off-brand version, while not unusable, didn't have enough stretch. I've been sticking to KT Tape only for a couple years now.

And for the last year or so, I've needed to use rather a lot of it - I've been plagued by very minor injuries that KT Tape can absolutely handle, and even render runs pain-free. But it does mean going through rolls at an uncomfortably fast clip, and as you've no doubt noticed, that stuff ain't cheap.

Sometimes, if you're not picky about color, you can find rolls cheaper on Amazon. I was picking through my options the other day when I saw in the comparisons something called OK Tape, and despite the somewhat eyebrow-raising name, the reviews were pretty good. They offered regular and "pro" versions a la KT Tape, with the key difference being a roll of OK Tape Pro runs about $7(!). That's less than half the usual cost of KT Tape Pro, so I figured, what the heck, let's give it a try!

My new tape actually arrived two days earlier than the initial predicted delivery date, and first impressions were good - the box looked legit, and while the tape inside lacked KT Tape Pro's plastic casing, it did have a protective wrapper. 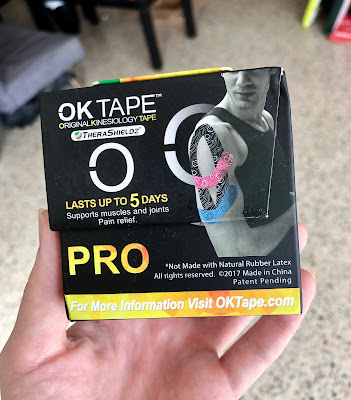 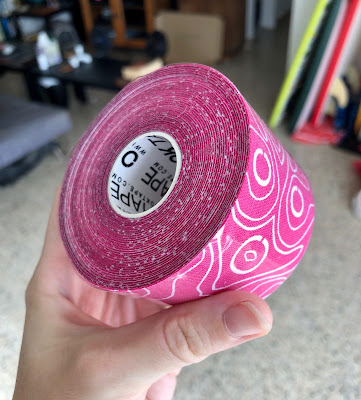 One odd thing is that as far as I can tell, OK Tape Pro only comes in one continuous uncut roll. Luckily it has guide marks on the paper backing, and I compared those against a strip of KT Tape to determine what would be a comparable amount. Then I just rounded the corners with scissors and I was good to go. 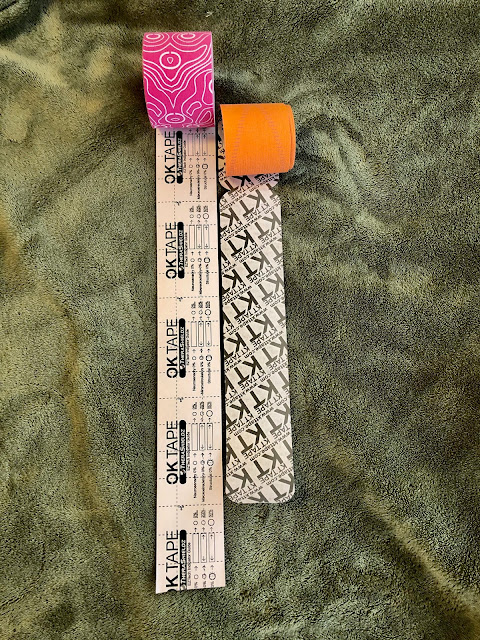 The only thing left to do then was take it for a test run! Application felt no different than KT Tape, from the amount of stretch to the texture of the non-adhesive side. In fact, it almost felt a little more secure.

Unfortunately, during my first trial I accidentally pulled off too much backing while applying my last strip of tape and it rolled in on itself and stuck. Boo. I was able to smooth it down but I knew that would negatively affect the adhesive and render the experiment void.

Curiously enough, despite this setback, the precise same amount of tape peeled at the same time KT Tape does during my 5K (see my previous KT Tape Extreme review). That boded well for at least being comparable, but I wanted to give it another shot.

Round two, before shot: 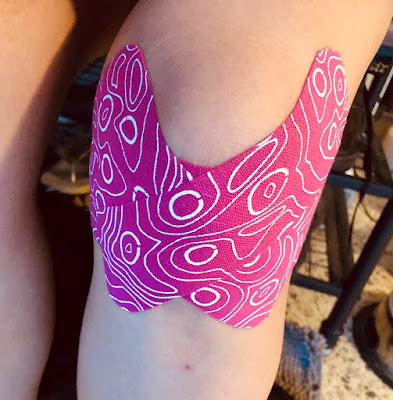 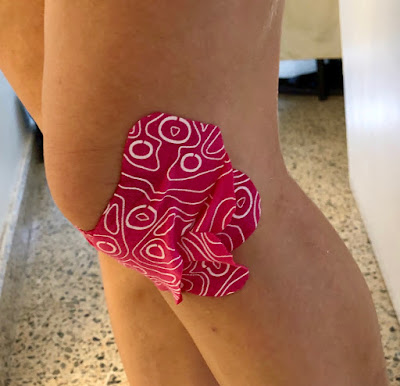 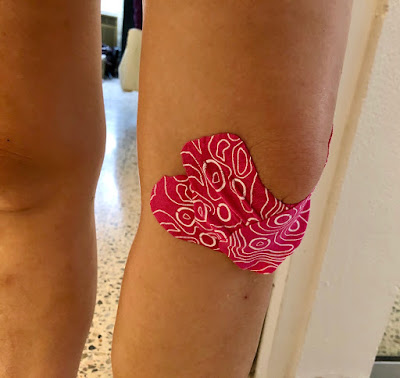 As you can see, it actually worked really well! I was surprised. The tape is starting to come up a little bit on one side, but under normal circumstances all but the bottom layer would've come off fully around the second mile of the run. Again, see my last tape review for reference. For a low-budget option, I'm impressed!

The funny thing is, OK Tape reminds me of Rock Tape. I tried Rock Tape at least five years ago, so it's been awhile, but I remember the roll I got wasn't precut and I even vaguely recall at the time the pattern was similar? I don't know. But I can't shake the feeling that this is almost like those cases where it turns out the brand name and the generic version are made in the same factory...

Whatever the case, for the price, OK Tape performs very well! It's not a total game-changer but I think it's a great dupe, maybe even for KT Tape Extreme over Pro. I might keep a roll or two of KT Tape around just in case, but when I can get two rolls of OK Tape for the price of one KT for similar performance I think the choice going forward will be clear.

Of course, there's always the question of product consistency over time, so I'll update you if I feel like OK Tape's quality diminishes, but in the meantime, you can't beat $7!