In Which Jenn Will Be Part Of Your World

My inner Disney Dandy has been thinking about this tank top for a long time.

I have this habit of hemming and hawing over purchases. I go to an online store, I fill my cart, I weed out the stuff I'm not as into until I have a good balance of interest to value, and then... I often do nothing. I am a chronic abandoner of carts.

This is, probably, mostly, a good thing. Helps me save money. Keeps me from acquiring stuff I don't need - or, more accurately, acquiring more stuff I don't need. But occasionally I really regret a purchase not made. I can't stop thinking about it. I go on the website, and it's sold out. Alas.

This very much happened to me with this Little Mermaid tank from Hot Topic. I lived in my cart once upon a time, but never made it home to me. Still, it would pop up in my head now and again - there's something very affirmative about that "I don't know when, I don't know how, but I know something's starting right now" portion of the lyrics of "Part of Your World," and the crochet Ariel elevates the entire piece.

I spent a couple years looking at resale sights like eBay and ThredUp, hoping to score - and I finally found it on Poshmark! I had to take a chance on an extra small, but the gamble paid off because it fits great. 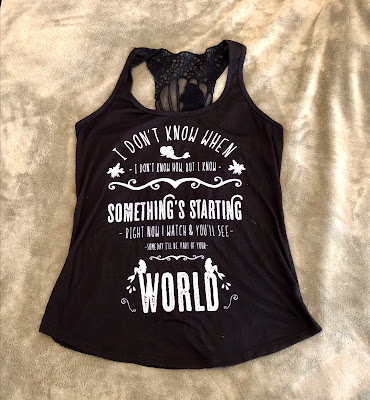 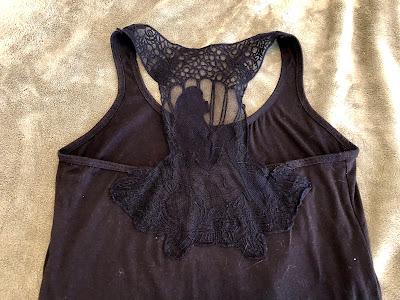 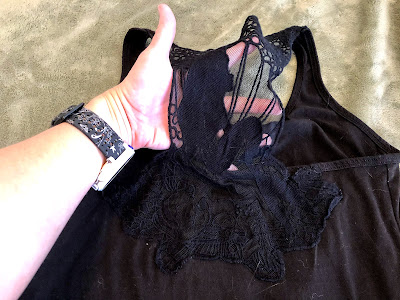 The only question was: what to wear with it? When I step out of the kingdom of dresses and wade into the swamp of separates, I tend to gravitate toward high-waisted items - I find them more flattering. But you can't do that with this shirt, as it would obscure too much of those all-important lyrics.

My ultimate solution surprises even me. 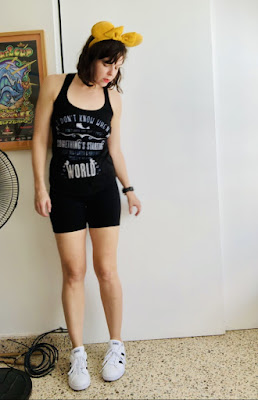 Who would've thought I'd ever wear bike shorts outside the athletic arena? Not me! And yet here we are. It's been a fashion trend for awhile now, and even, like, weirdly flattering...? But aside from the aesthetics, what I really like is the prospect of using those side pockets and ditching a bag. Imagine, breezing past bag check! Form and function. Good times. 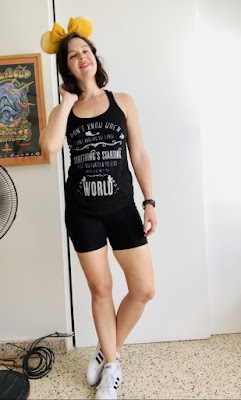 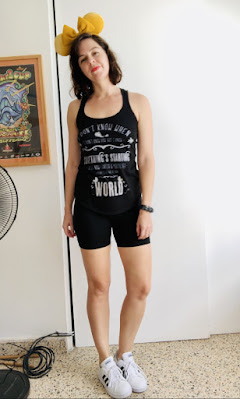 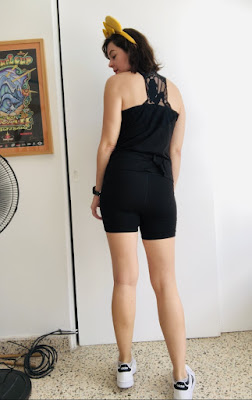 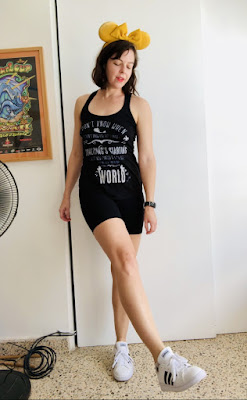 Oh, I have a proper tripod now. No more mirror shots! Next time I'll even take a step to the left and get the fan out of the frame. Also these screenshots are lookin' a little blurry. I gotta set up the remote clicker. Narcissism has a learning curve, is what I'm saying.

So that's my latest Disney clothing update. Until next time! Which given my track record could be, like, tomorrow...