Settle in, folks - it's time for giveaway #2. BUT FIRST: a review of the product you could win!

I was contacted about a month ago by SLS3 with an offer to try out their Dual Pocket Running Belt, categorized as for women and billed as waterproof. I've always been intrigued by the idea of a running belt, but I was always leery of the potential fit issues (more on this in a bit). But here was an opportunity to try one out for free - why not take the shot? A couple weeks later I had it in hand and took it for a run.

The dual pocket running belt is of unassuming but practical design. There are two zippered compartments, both of which stretch to accommodate I can only assume just about anything you'd want to jam in there. The smaller pocket wasn't long enough for my iPhone 6+, but the larger worked fine. I'm not saying you could cram an iPad mini in there, but I'm not not saying that. You could totally fit your phone, keys, credit cards, AND snacks all at once as long as you Tetrised it out properly.


Before we get to the running experience: about those body fit issues. See, I have what you might term a bit of junk in a trunk. A badonkadonk. An ass, as they say, that does not quit, even when you kind of wish it would. It gets going higher up on the torso than your average butt. As such, I look upon any sort of hip-wrapping item with extreme suspicion, and this belt was no exception. It was in the name of science that I placed the belt around my hips all the same and started running.

And it worked - sort of - at first. The creep was soooo slow and subtle as to be nearly imperceptible. I had to slide it back down my hips every five minutes or so, which isn't that bad, all things considering - I mean, it's not like there was any annoying bouncing or anything going on, and really I was being preemptive; it didn't move THAT far. Ultimately, though, I decided that the best thing to do would be to hike it up to my waist proper, tighten it all the way, and see how that worked.

In a word: well! On my waist the belt stayed just fine, and I found a frequently forgot I was even wearing it, even with my iPhone ensconced within. As for waterproof... ness, it wasn't raining in the gym but I DID sweat on it a bit when it was at my hips and the phone came out dry.

I call this a success and will not hesitate to slap this belt on when the warmer months hit and I start running outdoors again. It'll be perfect for storing mid-run fuel and, most importantly, my keys. 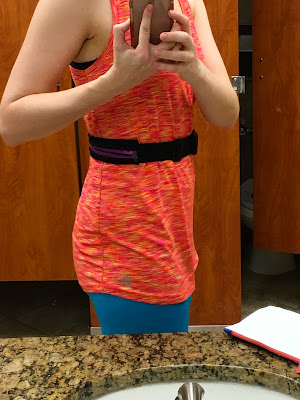 In short: if on-the-hip is a priority for you and/or you have a butt of some renown, skip this belt. If you're cool with having the belt sit at your waist, it's a good deal and I can pretty much guarantee it'll hold any reasonable thing you want it to hold in some quantity (minus a water bottle, although I think they offer hydration belts as well). It even comes with multiple zipper colors if you're trying to match a costume.

You can get the SLS3 Dual Pocket Running Belt at their online store for about $30 OR, if you jump on it now, you can get it at their Amazon store for a mere $13. Not sure how long that deal will last, but you'll be hard pressed to beat it.

Or if you're very lucky, you can win it right here! SLS3 has graciously provided me with one Dual Pocket Running Belt to give away to my readers. Simply enter via the Rafflecopter below. You've got one week to enter. Good luck!

Do you use a running belt? Does your ass ever quit? Mine doesn't.