In Which Jenn Discusses Dopey Takeaways

And now here we are, at the finish line, as it were. My final Dopey trip post. Only took me two and half months to get there!

Not that there is, sadly, much more to say on the subject, but I did want to do a quick rundown of my takeaways from the whole Dopey Challenge experience. For those who are new to the runDisney table, the Dopey Challenge is a part of the Walt Disney World Marathon Weekend where you do ALL the races. The 5K. The 10K. The half. The full. One a day, one right after the other. It's not nearly as crazy as it sounds - but it does change up the game a little. 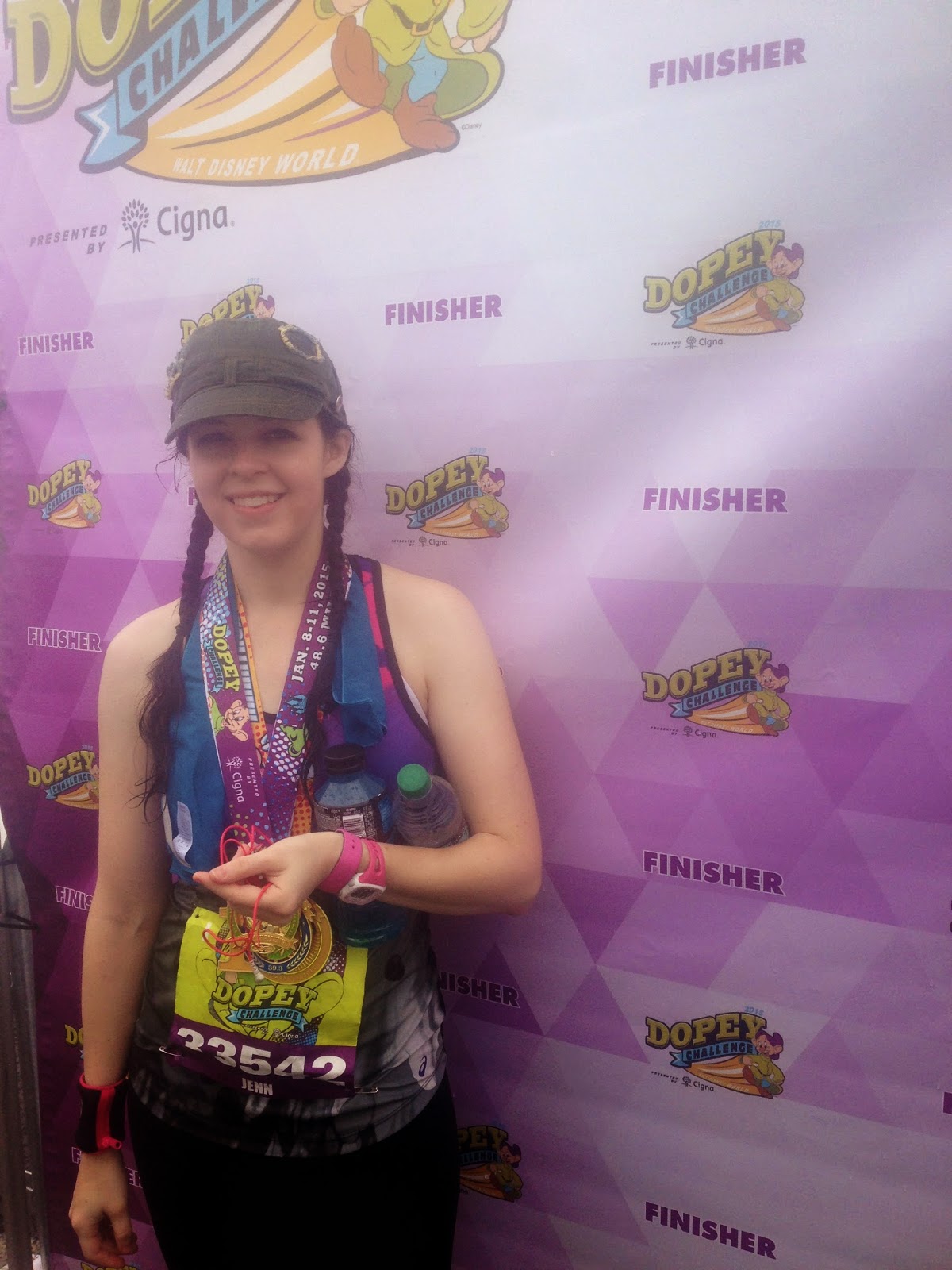 For starters, I found I definitely had to toss my plans and chill. For the average person (and by average I mean "like me") the Dopey Challenge is NO PLACE for any kind of PR. Unless it's a PR in Worstness. Don't push. Slow down. Enjoy. And I know - there's a certain amount of DUH! there - but I don't think you truly understand how calm and relaxed you have to be until it's happening to you.

So yeah, slow down and enjoy - but I do think the Dopey makes the enjoy part harder. Your headspace is swirling with what left there is to do, and usually that's a LOT. For that reason, I wouldn't say Dopey is for everyone; you need a strong mental game as much as if not more so than physical. That having been said, even if it does suck some of the fun out of running, it definitely amps up the pride factor. I am decidedly pleased with myself for finishing the challenge.

Speaking of headspace, I found that my morale was actually lowest right before the half. During the 5K and 10K, I could at least comfort myself with the knowledge that it would all be over soon. During the half, I knew I was a solid two and half hours and more away from a hot shower, and then I had to run a freakin' marathon the next day. If I ever do it again, I will arrange some sort of pick-me-up for that morning.

Oh, and make sure you prepare for EVERYTHING, and by everything I mean cold. Bring more throwaways than you think you'll need. I think we get complacent because it's Florida, but it's still January and anything can happen.

The races themselves were actually pretty okay. I was pretty much the exact opposite of lightning fast but I didn't injure myself and I was never in the slightest danger of getting swept. I will say that I needed a LOT a LOT A LOT A LOT A LOT more food than usual, especially during the marathon. When I ran the Marine Corps Marathon, I ate a couple snacks Nicole had given me beforehand and then a pack and a half of Clif Shot Bloks because I dropped the second pack like an idiot and I was fine. But for the final leg of Dopey I ate two full packs plus like three energy gels and a banana. You're expending a TON of energy over the four days of the Dopey Challenge and should I repeat the experience I will bring more sustenance out on the course.

And! BRING RUNNING BUDDIES. I say that as a person who usually does NOT run with buddies, and often prefers to get lost in her music and zone. Well, under normal circumstances that's fine, but under the grueling miles of the Dopey Challenge that's no way to live. KRaut and KVac totally made my marathon. Could I have finished without them? Sure. Would I have kept as high a morale and plugged along as steadily? Not even close.

Here's the ultimate thing about Dopey, though. Since I ran my first marathon, every half marathon has sounded like total cake. After having run Dopey, my reaction to a marathon, plain and simple all by itself, is this: oh, is that all?

One more thing - there was a girl in corral J who recognized me and Katherine and said she liked our blogs. I failed to get her name like a moron but I just wanted to say: if you're out there, random girl, thanks so much!