In Which Jenn Discusses Mid-Run Fueling

I dunno, guys. I must be doing it wrong.

Earlier we talked about pre- and post-run fueling, and that's very important. But it seems like there's a whole lot of buzz surrounding the gels and beans and shots and such that provide energy during a run. Many reported that they found substantial improvement in their runs when they consumed something during, and as a fledgling runner I thought: clearly I need some energy gels! 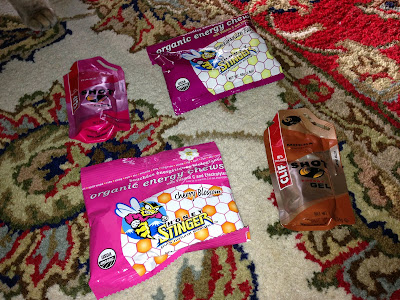 After Moon and I had somewhat mixed results with Energy Bits, I was determined to figure out what WOULD work. I went straight to the store and bought several types of fuel: Honey Stinger organic chews, Clif Shots, Clif Shot Bloks, and, as my control group, some Swedish fish. I have tried them all multiple times and I can say now, with confidence, what makes a definitive difference in my performance.

Oh, sure, I had some good runs using the fuels. But I had just as many lackluster runs. I never felt any energy surges, and at no point can I report feeling AWESOME I COULD RUN FOREVER which, puzzlingly to me, many people seem to. (Is it the caffeine? I can drink a cup of coffee and go right to sleep. I KNEW that would come back to bite me!)

Now, I will note one advantage. I mentioned before that occasionally, if I've pounded particularly hard or long, I feel a little sick after a run, and need to sit down and eat something immediately. I did find that, if I had eat something during the run, I was far less likely to feel sick afterward. For this purpose, there was a winner - Clif Shot Bloks, which were reasonably tasty, fairly easy to get down, and did tend to make me feel a little more together. If any one fuel worked for me, it would be that one. But even with the Bloks I never really felt more capable, and where I succeeded it seemed more due to mental endurance than added physical endurance. 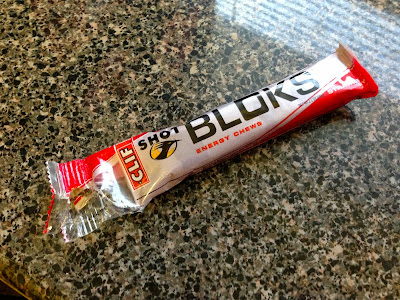 What I have decided is that I will consume Bloks under the following circumstances:
Other than that, the jury's still out. I know there are LOTS of other options out there, but most of them require special trips or ordering online, and the ones I tried were readily available in the store. I suppose I could try one of those sample box subscriptions like Kona Kase, but I'm not at all sure I want to make that financial commitment.

Anyone out there have a similar problem? Have you found your perfect mid-run fuel?